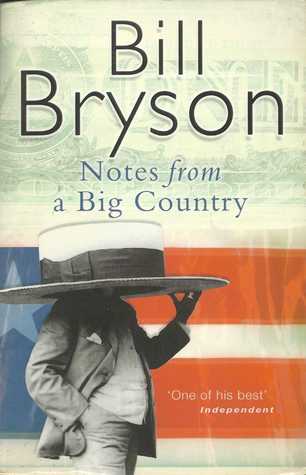 After many years in Great Britain, Bill Bryson returns to his home country with his family for a while. He is one of my favourite authors.

If you need to laugh out loud, really laugh, pick up a Bill Bryson book and get carried away. I always said my favourite of his books was "Notes from a Small Island" (added by "The Road to Little Dribbling" later on) but I am not so sure after this one. Maybe because I also have left my home country and lived abroad for about a quarter of a century and don't always know my own country that well myself any more, maybe because this book seems to be even more personal than many of the other Bryson books ... in any case, I loved it.

From the back cover:
"Bill Bryson has the rare knack of being out of his depth wherever he goes - even (perhaps especially) in the land of his birth. This became all too apparent when, after nearly two decades in England, the world's best-loved travel writer upped sticks with Mrs. Bryson, little Jimmy et al. and returned to live in the country he had left as a youth.

Of course there were things Bryson missed about Blighty but any sense of loss was countered by the joy of rediscovering some of the forgotten treasures of his childhood: the glories of a New England autumn; the pleasingly comical sight of oneself in shorts; and motel rooms where you can generally count on being awakened in the night by a piercing shriek and the sound of a female voice pleading, 'Put the gun down, Vinnie, I'll do anything you say.'

Whether discussing the strange appeal of breakfast pizza or the jaw-slackening direness of American TV, Bill Bryson brings his inimitable brand of bemused wit to bear on that strangest of phenomena - the American way of life."

I have a blogpost called "Bill Bryson - Funniest Author ever" where I link to all my Bryson reviews.
Posted by Marianne at 15:29