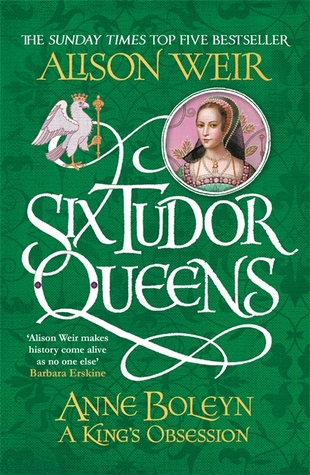 After having read "The Six Wives of Henry VIII" and "Six Tudor Queens. Katherine of Aragon. The True Queen", I had to read the story of the next queen, probably the most well-known and disputed one of King Henry's wives, Anne Boleyn. A wonderful portrayal of a young woman who seemed to have it all, at least for a while.

Just as the story about Katherine of Aragon, this one is told from the point of view of the new queen, Anne Boleyn. We hear about so many other facts about her life and can understand her a little better, I believe. Was she really the woman who wanted to break up a marriage for the sake of her own advantage, to become queen, and was she thereby responsible for the creation of the Church of England? Or was she simply just another playball in men's politics, a way for her father advance into higher royal circles and thereby getting richer and more important, a new toy for the king to play with?

We may never know the real truth behind her but Alison Weir gave us the chance to have a look at her from a different side, to try to get to know the real Anne Boleyn. The author has a great knowledge about the Tudors and therefore is able to bring them closer to us.

When I was younger, I always wondered how this despotic king managed to find six women who were willing to marry him but I have since learned that getting married back then wasn't the same as it is today, certainly not in the royal and aristocratic circles. I am really looking forward to reading about the other four wives in the next books.

"The young woman who changed the course of history.

Fresh from the palaces of Burgundy and France, Anne draws attention at the English court, embracing the play of courtly love.

But when the King commands, nothing is ever a game.

Anne has a spirit worthy of a crown - and the crown is what she seeks. At any price.

ANNE BOLEYN. The second of Henry's Queens. Her story.

History tells us why she died. This powerful novel shows her as she lived."

Find my reviews of Alison Weir's other books here.
Posted by Marianne at 13:37