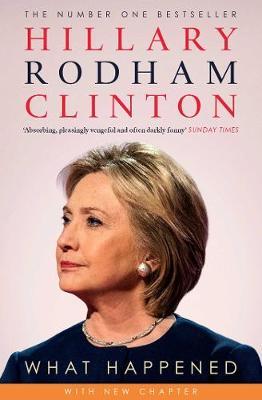 Years ago, I read "Living History" with my book club and really liked the way, Hillary Clinton described her life as a first lady but also her life as a politician herself.

Nobody who is not US American understands how someone can lose an election when they have three million more voters behind them. Only in America.

I don't think I can make anyone change their mind about Hillary Rodham Clinton or her party. Those who are against her will come up with hundreds of reasons why they didn't vote for her. I can name one very good reason why they should have: Donald Trump. Anyone who still supports him either doesn't want to know what is going on or is just as ignorant as he is. Because who would support a misogynist like him?

Hillary Clinton tells us everything that happened during the election. Not that a lot of it was any news for me, I followed it quite closely. I have a lot of American friends who - like me - were shocked by the outcome; unfortunately, I also know some who were happy about it.

Even in Europe, my view is considered left-wing, so I would agree far more with Democrats than with Republicans. I found it quite eye-opening at some points, how far right even the American left is.

What I liked was her humour, her tongue-in-cheek which shows how much more intelligent she is than the present incumbent of the post.

If you are really interested in politics, you give this book a chance. Hillary Clinton is a strong woman and we all should be glad there are people like her.

Here she explains quite interestingly, how some of the stories start:
"Bernie: I think America should get a pony.
Hillary: How will you pay for the pony? Where will the pony come from? How will you get Congress to agree to the pony?
Bernie: Hillary thinks America doesn’t deserve a pony.
Bernie Supporters: Hillary hates ponies!
Hillary: Actually, I love ponies.
Bernie Supporters: She changed her position on ponies! #WhichHillary? #WitchHillary
Headline: 'Hillary Refuses To Give Every American a Pony.'
Debate Moderator: Hillary, how do you feel when people say you lie about ponies?
Website Headline: "Congressional Inquiry into Clinton's Pony Lies"
Twitter Trending: #ponygate"

"Almost two years on from one of the most unprecedented and unpredictable elections in American history, the world is still gripped by the circumstances and consequences of Hillary Rodham Clinton's devastating loss to the ever-controversial Donald Trump.

Free from the constraints of running, Hillary takes us behind the scenes of an election marked by rage, sexism, exhilarating highs and infuriating lows, stranger-than-fiction twists, foreign interference and an opponent who broke all the rules. In her most personal memoir yet, she tells readers what it took to get back on her feet after the mistakes and disappointments of her candidacy and what the experience has taught her about the challenges, criticisms and double standards that come with being a strong woman in the public eye.

In this edition, now updated to include a comprehensive new afterword reflecting on the events that have come to pass under Trump's administration, Hillary connects the dots to show just how dangerous the forces are that shaped the presidential outcome and why Americans need to understand them to protect their values and democracy in the future.

What Happened is the enthralling story of a campaign and its aftermath - both a deeply intimate account and a presciently cautionary tale."
Posted by Marianne at 17:32