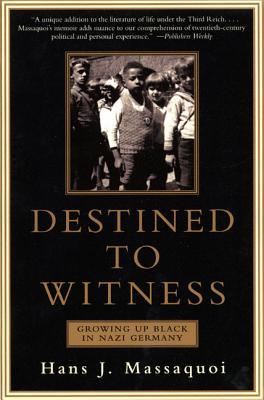 Very interesting autobiography written by a German/Liberian boy who grew up in Nazi Germany. He describes his childhood and youth in Hamburg during a time where everyone had to have blond hair and blue eyes. There were very few dark-skinned people in Germany at the time but for some miraculous reason the Nazis never openly persecuted him.

With his story, he has probably told us more about the thoughts and wishes of an ordinary German as any other account about this time. Even though he we anything but the Aryan stereotype, he wanted to belong, he wanted to be a Hitler boy. That is what almost every child (and grown-up) wants, belong to the society around them, no matter how they treat them. I thought he described that very well. We also get a good view of the "common" people and the different members of the Nazi party. He talks about the people who helped him as well as the ones who didn't. He gives a fantastic insight into life during the war. This book also shows, that the Nazis didn't just hunt and destroy the Jews, anyone who didn't look and/or think like them was on their list of "unwanted people". Very well written and certainly worth reading, especially if you are interested in this era.

Hans J. Massaquoi emigrated to the USA later where he became managing editor of Jet and Ebony magazine.

The German Title of this book is "Neger, Neger, Schornsteinfeger" (Negro, Negro, Chimney Sweep), a rhyming slang the kids used to call him. The book has also been made into quite a successful (German) film under that same title.

From the back cover:
"This is a story of the unexpected. In 'Destined to Witness', Hans Massaquoi has crafted a beautifully rendered memoir - an astonishing true tale of how he came of age as a black child in Nazi Germany. The son of a prominent African and a German nurse, Hans remained behind with his mother when Hitler came to power, due to concerns about his fragile health, after his father returned to Liberia. Like other German boys, Hans went to school; like other German boys, he swiftly fell under the Fuhrer's spell. So he was crushed to learn that, as a black child, he was ineligible for the Hitler Youth. His path to a secondary education and an eventual profession was blocked. He now lived in fear that, at any moment, he might hear the Gestapo banging on the door -- or Allied bombs falling on his home. Ironic,, moving, and deeply human, Massaquoi's account of this lonely struggle for survival brims with courage and intelligence."
Posted by Marianne at 18:37