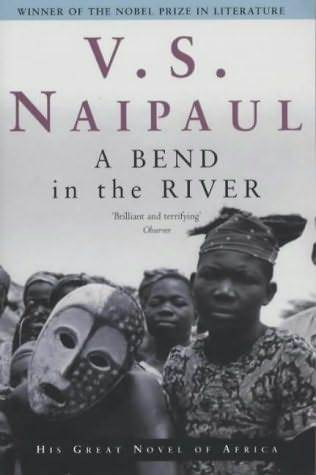 Salim, an African of Indian descent, settles in an unnamed town at the bend in the river as a shopkeeper. With his “foreign” eyes we see part of Africa's history after the colonists left, the changes both in politics and the community, the problems with the economy, the war-like situations. The changes for the local community as well as for the outsiders like Salim who never really truly belong. As an expatriate myself, I can fully understand the problems he encounters, even though they are different from country to country.

Another highly interesting novel by this author who truly deserved the Nobel prize he received.

From the back cover:
"In the 'brilliant novel' (The New York Times) V.S. Naipaul takes us deeply into the life of one man - an Indian who, uprooted by the bloody tides of Third World history, has come to live in an isolated town at the bend of a great river in a newly independent African nation. Naipaul gives us the most convincing and disturbing vision yet of what happens in a place caught between the dangerously alluring modern world and its own tenacious past and traditions."

V.S. Naipaul received the Nobel Prize for Literature in 2001 "for having united perceptive narrative and incorruptible scrutiny in works that compel us to see the presence of suppressed histories" and was shortlisted for the Booker Prize for "A Bend in the River: His Great Novel of Africa" in 1979.

I contribute to this page: Read the Nobels and you can find all my blogs about Nobel Prize winning authors and their books here.
Posted by Marianne at 21:04