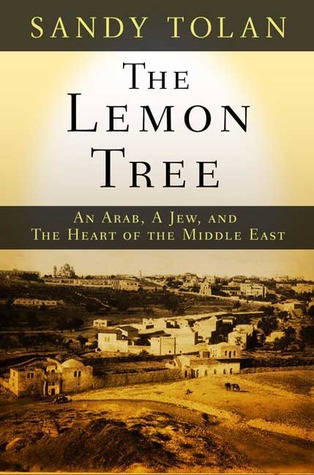 A Palestinian boy travels back to the house in 1967 his family had to leave behind nineteen years earlier. He meets the present family who had to flee Europe at that time. This is the beginning of a friendship that is probably unique but gives so much hope. Hope that the conflict between Israelis and Palestinians might be resolved one day, if only everyone would act the way these people do.

This reads like a novel. And you can imagine the problem that you find here, you can connect to both sides, they are both right in their own way.

We also learn about the Jewish population, how they came to Israel, the family living in the house with the lemon tree now came from Bulgaria and the author describes their history, as well.

The book is political as well as personal, the different experiences of the war, called "War of Independence" by one side and "Catastrophe" by the other, for example, the hopes the Palestinians had in the promised right of return, the experience of the Jews with the Holocaust, so many lives and hopes destroyed.

But it is also a story of hope, how people can get together, how the little people can often contribute more to the peace in their country and in this world than all the politicians with their meetings and summits.

Sandy Tolan has only written one other book about a completely different subject but I'd definitely love to read it.

From the back cover:
"In 1967, not long after the Six Day War, three young Arabs ventured into the town of Ramla, in Jewish Israel. They were on a pilgrimage to see their separate childhood homes, from which their families had been driven out nearly twenty years before during the Israeli war for independence. Only one was welcomed: Bashir Al-Khayri was greeted at the door by a young woman named Dalia.

This act of kindness in the face of years of animosity and warfare is the starting point for a remarkable true story of two families, one Arab, one Jewish; an unlikely friendship that encompasses the entire modern history of Israelis and Palestinians and that holds in its framework a hope for true peace and reconciliation for the region."

Another interesting book on this subject: LeBor, Adam "City of Oranges"
Posted by Marianne at 18:37