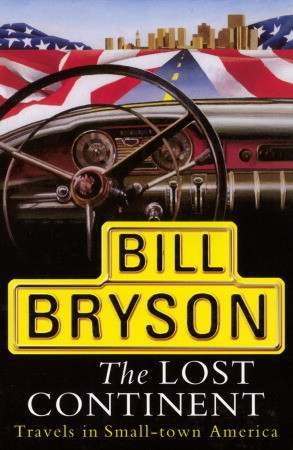 What more fun can be than going on a trip through the USA with America's most hilarious travel writer. Especially when he sees it after having lived abroad for several years, so with almost foreign eyes. He starts in his hometown Des Moines in Iowa ("where somebody has to come from") and goes from East to West.

As with all his other books, I really loved this one.

From the back title:
"'I come from Des Moines. Somebody had to'
And, as soon as Bill Bryson was old enough, he left. Des Moines couldn't hold him, but it did lure him back. After ten years in England, he returned to the land of his youth, and drove almost 14,000 miles in search of a mythical small town called Amalgam, the kind of trim and sunny place where the films of his youth were set. Instead, his search led him to Anywhere, USA; a lookalike strip of gas stations, motels and hamburger outlets populated by lookalike people with a penchant for synthetic fibres. Travelling around thirty-eight of the lower states - united only in their mind-numbingly dreary uniformity - he discovered a continent that was doubly lost; lost to itself because blighted by greed, pollution, mobile homes and television; lost to him because he had become a stranger in his own land.
The Lost Continent is a classic of travel literature - hilariously, stomach-achingly funny, yet tinged with heartache - and the book that first staked Bill Bryson's claim as the most beloved writer of his generation."

I love all of Bill Bryson's books. Find a link to my reviews here.
Posted by Marianne at 21:02