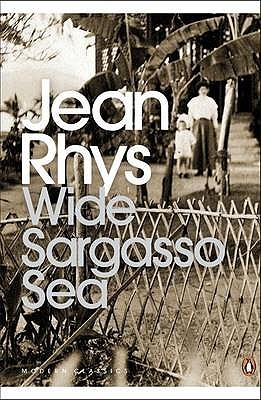 Same as "Becoming Jane Eyre", I read this when our book club decided to read "Jane Eyre" by Charlotte Brontë this year, just as I had reread it a couple of months ago.

"Wide Sargasso Sea" is considered a "prequel" to "Jane Eyre" , what happened to Mr. Rochester in his first marriage in the Caribbean, how did the marriage come about and how did it end up in such a dreadful way.

Jean Rhys was born in Dominica, so she knows quite something about life in the "West Indies". I really enjoyed learning about the people there at that time. Even though you know where it all leads (if you have read "Jane Eyre"), it still is a very exciting tale of love and love lost, different cultures clashing, highly recommendable.

From the back cover:
"Her grand attempt to tell what she felt was the story of Jane Eyre's 'madwoman in the attic', Bertha Rochester, Jean Rhys's Wide Sargasso Sea is edited with an introduction and notes by Angela Smith in Penguin Classics.

Born into the oppressive, colonialist society of 1930s Jamaica, white Creole heiress Antoinette Cosway meets a young Englishman who is drawn to her innocent beauty and sensuality. After their marriage, however, disturbing rumours begin to circulate which poison her husband against her. Caught between his demands and her own precarious sense of belonging, Antoinette is inexorably driven towards madness, and her husband into the arms of another novel's heroine. This classic study of betrayal, a seminal work of postcolonial literature, is Jean Rhys's brief, beautiful masterpiece.
Jean Rhys (1894-1979) was born in Dominica. Coming to England aged 16, she drifted into various jobs before moving to Paris, where she began writing and was 'discovered' by Ford Madox Ford. Her novels, often portraying women as underdogs out to exploit their sexualities, were ahead of their time and only modestly successful. From 1939 (when Good Morning, Midnight was written) onwards she lived reclusively, and was largely forgotten when she made a sensational comeback with her account of Jane Eyre's Bertha Rochester, Wide Sargasso Sea, in 1966."
Posted by Marianne at 19:44