Dickey, Eric Jerome "The Other Woman" 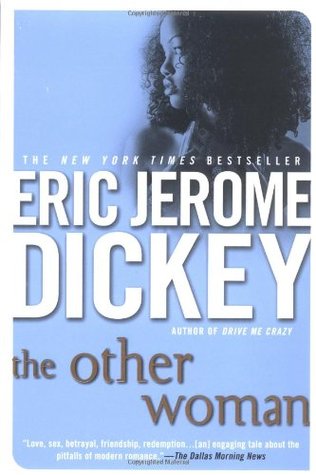 This book looked interesting, a book about a modern marriage. They are separated already at the beginning of the story through their work, they rarely meet. The consequences are inevitable. The relationship ends in betrayal. This could have been an interesting novel, the plot was not bad. But the writing was. Not my cup of tea. Disappointing.

"Eric Jerome Dickey strides boldly over the minefield that is modern marriage. The central couple's biggest challenge is timing: He works days; she works nights. Instead of growing together, they're rapidly drifting apart, coexisting on stolen phone calls from work, punctuated by occasional bedroom encounters that leave them both feeling even emptier and more alone. When she finds out about his affair-and starts her own-the delicate fabric of their marriage is torn irrevocably asunder. Or is it? In Dickey's expert hands, what begins as a seemingly unforgivable betrayal segues into the sexy and searing story of a man and a woman at a pivotal turning point in their relationship. Only time will tell whether they'll let it all go...or can hold on to the love that drew them together in the first place."
Posted by Marianne at 17:34