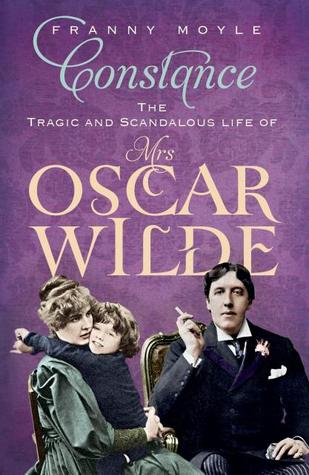 I love Oscar Wilde and I love biographies. So, when I discovered this biography about Oscar Wilde's wife, I didn't have to think twice. I just had to read it.

And I wasn't disappointed. I must say, I had no idea Oscar Wilde even had a wife. And children. Of course, once I knew, I could only imagine a tragedy. And so it was. The life of a woman was hard enough in the middle of the 19th century but being married to one of the most prominent people at the time and being involved in such a scandal must have been an insurmountable obstacle.

Franny Moyle describes Constance's life from the beginning to the end, her youth in poverty, her ascent into society after marrying Oscar and the inevitable fall after his secret life was unveiled. How much power a woman has when it comes to the task to prevent her loved ones from disaster. Constance has shown this to us.

If you are only remotely interested in Oscar Wilde and/or women's lives before ours, this is the book for you.

From the back cover:
"In the spring of 1895 the life of Constance Wilde changed irrevocably. Up until the conviction of her husband, Oscar, for homosexual crimes, she had held a privileged position in society. Part of a gilded couple, she was a popular children’s author, a fashion icon, and a leading campaigner for women’s rights. A founding member of the magical society The Golden Dawn, her pioneering and questioning spirit encouraged her to sample some of the more controversial aspects of her time. Mrs. Oscar Wilde was a phenomenon in her own right.

But that spring Constance’s entire life was eclipsed by scandal. Forced to flee to the Continent with her two sons, her glittering literary and political career ended abruptly. She lived in exile until her death.

Franny Moyle now tells Constance’s story with a fresh eye. Drawing on numerous unpublished letters, she brings to life the story of a woman at the heart of fin-de-siècle London and the Aesthetic movement. In a compelling and moving tale of an unlikely couple caught up in a world unsure of its moral footing, Moyle unveils the story of a woman who was the victim of one of the greatest betrayals of all time."

I also read: "The Importance of Being Earnest" and "A Woman of No Importance".
Posted by Marianne at 11:36