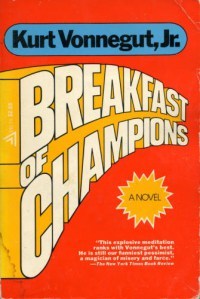 I don't remember when I heard the word "vonnegutesque" for the first time but I remember thinking "what a wonderful word". If you spelled his name according in German and translated it, you would get the expression "good bliss", so maybe that added to the good feeling I had about that name.

When I picked up this book, I fell in love with the description already: "In a frolic of cartoon and comic outbursts against rule and reason, a miraculous weaving of science fiction, memoir, parable, fairy tale and farce, Kurt Vonnegut attacks the whole spectrum of American society, releasing some of his best-loved literary creations on the scene."

A "frolic", that is the right description. What a whirlwind! The story jumps around in a funny way. There is satire, magic, a mix between comic and novel, drama and tragedy. The whole book seems like an explanation for aliens, is this how they would see our world? Probably, I think Vonnegut draws a good line, his criticism of modern (American) society is to the point. Ouch!

I also love his playing with words just for the sake of it. When he sees the name of a truck company, Pyramid, he asks "why would anybody in the business of high speed transportation name his business ... after buildings which haven't moved an eighth of an inch since Christ was born?" Apparently, the answer is "he liked the sound of it". And I liked the sound of so many words Kurt Vonnegut used.

This book is hilarious, it gives you a good laugh. But it is also very critical. I loved it.

"In Breakfast of Champions, one of Kurt Vonnegut’s  most beloved characters, the aging writer Kilgore Trout, finds to his horror that a Midwest car dealer is taking his fiction as truth. What follows is murderously funny satire, as Vonnegut looks at war, sex, racism, success, politics, and pollution in America and reminds us how to see the truth."

Really have to check out "Slaughterhouse-Five".
Posted by Marianne at 16:47