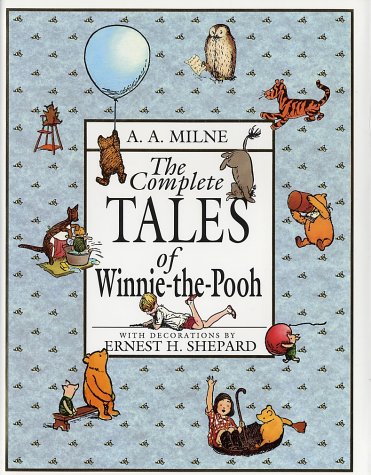 Which child doesn't like Winnie the Pooh? Well, I didn't, because I didn't even know he existed. I grew up outside of the English literature world, well, at least until I started secondary school. So, I read him later, when I was an adult.

I love the description of where Pooh lives namely "under the name Sanders" in a house in the Hundred Acre Wood, the double meaning says it all and sets the tone for this rather funny and psychological children's story.

It is so beautifully written and there is so much story, so much heart in it, that you can read it at any age and enjoy it.

"AA Milne, born in 1882, based the characters of Pooh Bear, Eeyore the Donkey, Piglet, Tigger, Kanger and Roo on his son, Christopher Robin's real nursery toys. The Milne family live in Ashdown Forest and the stories of their adventures are based there."
Posted by Marianne at 20:33