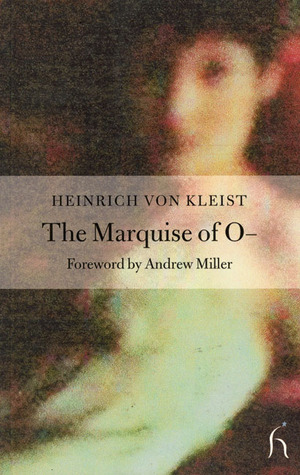 Heinrich von Kleist. He is a contempory of Jane Austen, although I am sure they never met. Even if they hadn't been living in different countries, their circumstances were very different. Von Kleist was more a "high society" guy.

So, his dramas are about nobility, the marquise being the daughter of a colonel and, after being widowed, courted by a count. She finds herself pregnant and that is the big problem of the story.

Quite an interesting story, not very long but there is so much in this, society and the restraints it puts on everyone, especially women.

I quite enjoyed this novella, even though I prefer books to have more than 500 pages, at least.

"An ingenious 'whodunit' and one of the greatest works of German literature, The Marquise of O– subverts the 18th-century notion of the infallibility of man and reveals the true ambiguity and caprice of humanity. Held captive by a band of unspeakable ruffians, the Marquise of O– is rescued before they can subject her to a fate worse than death. So how can it be that, some months later, she finds herself pregnant? Believing herself fully innocent, although failing to convince her prudish family of her honor, she places an advertisement asking the perpetrator to identify himself. Heinrich von Kleist is the first of the great dramatists of 19th-century German literature."

I also read the play "The Prince of Homburg".
Posted by Marianne at 19:43