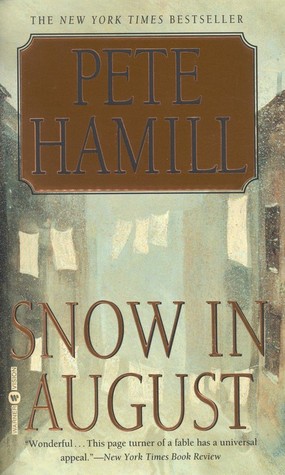 Brooklyn, two years after World War II. An 11 year old Irish Catholic boy whose father died in battle and who lives alone with his mother befriends a Czech Rabbi and learns about Judaism and the Holocaust. Together they face racism and violence. Together with Michael, we learn about the Yiddish language, Jewish history, Jewish literature, the Jewish folkloristic Golem and - baseball.

The story is well-told, switching between the past and the present, building anticipation. You could almost read the story in a day but you don't want to say good-bye too early to the characters as you hopefully grow to love them as much as I did.

I really loved this book and would like to read more by this author.

"In the year 1947, Michael Devlin, eleven years old and 100 percent American-Irish, is about to forge an extraordinary bond with a refugee of war named Rabbi Judah Hirsch. Standing united against a common enemy, they will summon from ancient sources a power in desperately short supply in modern Brooklyn-a force that's forgotten by most of the world but is known to believers as magic."
Posted by Marianne at 14:24