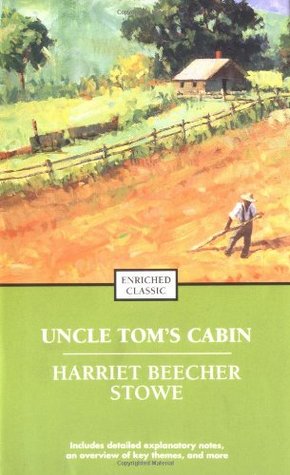 This is one of the most tragic stories I have ever read, and I think I've read my fair share of tragedies. I have read books about wars, concentration camps and slavery, to name but a few. As with other classic stories, I had heard about the content, I knew what was going to happen to Uncle Tom, I knew what happened to slaves, how they were sold and tortured, how they would sell spouses and children away from their families. But it's tragic every time again, especially if you put a name to the people involved, if they are described in such a way that they come alive on the paper.

Harriet Beecher Stowe has managed to do just this, she brings alive all those poor people who had no rights at all and who had no hope that anything would ever improve in their lives, that they and their loved ones would get away from a fate worth than death.

There is Uncle Tom, a faithful servant to a good "master" who would never sell him. Or would he? Several other characters in the novel learn that when money is involved, everything is possible, whether the owner wants to sell their "possessions" or not. Then there is his family who have to say good-bye to husband and father, knowing they will never see him again. And then there are all the other poor souls, all of whom have a cross to bear, one story seems more unbearable than the next. Amazing how they still can go on and even have compassion. But they do.

I read that "Uncle Tom's Cabin" is not read in school anymore because of the racial prejudices that were around at the time and that the author repeats several times. I don't think that's a reason not to read it anymore, on the contrary. That would be the same as not reading anything about concentration camps and the Nazis anymore. No, I think as long as we read these stories and are aware of the prejudices that used to exist, we can fight those that still are around. The more we see about it, the more ridiculous they seem and the earlier they will be eliminated.

I totally loved reading this story, even though I never like this way of describing a story of this content.

"Uncle Tom, Topsy, Sambo, Simon Legree, little Eva: their names are American bywords, and all of them are characters in Harriet Beecher Stowe's remarkable novel of the pre-Civil War South. Uncle Tom's Cabin was revolutionary in 1852 for its passionate indictment of slavery and for its presentation of Tom, 'a man of humanity, as the first black hero in American fiction. Labeled racist and condescending by some contemporary critics, it remains a shocking, controversial, and powerful work - exposing the attitudes of white nineteenth-century society toward "the peculiar institution" and documenting, in heartrending detail, the tragic breakup of black Kentucky families "sold down the river." An immediate international sensation, Uncle Tom's Cabin sold 300,000 copies in the first year, was translated into thirty-seven languages, and has never gone out of print: its political impact was immense, its emotional influence immeasurable.

The narrative drive of Stowe's classic novel is often overlooked in the heat of the controversies surrounding its anti-slavery sentiments. In fact, it is a compelling adventure story with richly drawn characters and has earned a place in both literary and American history. Stowe's puritanical religious beliefs show up in the novel's final, overarching theme - the exploration of the nature of Christianity and how Christian theology is fundamentally incompatible with slavery."
Posted by Marianne at 12:24