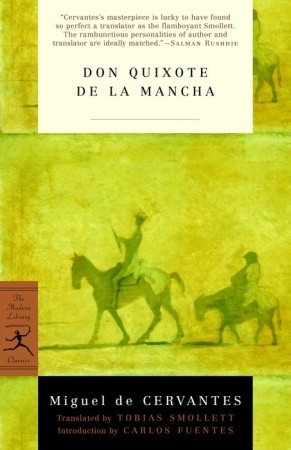 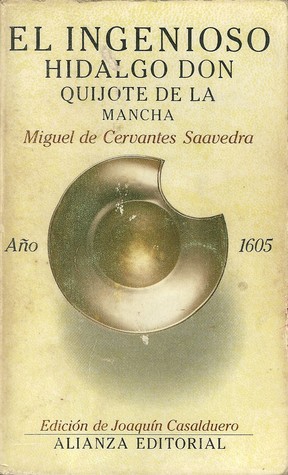 Even if people haven't read Don Quixote, they know about his horse Rocinante, his faithful servant Sancho Panza and his beloved Dulcinea, his fight with the windmills and several other of his stories.

A lot of short stories are told, almost like in "The Decameron" which is about 300 years older. Still, you can tell the medieval character.

This might be one of the reasons why I enjoyed the second part more than the first, I had made my way through all those little stories and the whole thing came together more and more and developed into a large book rather than just little short stories.

Don Quixote lives in a world of his own which makes the story at times almost fantasy-like. However, this is always accompanied with a twinkle in the author's eye so we can all have a good laugh together. We fear with Don Quixote for the outcome of his next task, with Sancho for the outcome of the whole adventure. Will he ever return home to wife and children?

I was I had an edition that was parted in two halves, even they were very heavy. In cases like this I can understand that people tend toward an eReader, even though I normally don't like that at all (see here).

So, if you do like classic books, or large books, you should definitely put this on your reading list. And remember, especially when reading Don Quixote "Things are not always what they may seem."

"Cervantes' tale of the deranged gentleman who turns knight-errant, tilts at windmills and battles with sheep in the service of the lady of his dreams, Dulcinea del Toboso, has fascinated generations of readers, and inspired other creative artists such as Flaubert, Picasso and Richard Strauss. The tall, thin knight and his short, fat squire, Sancho Panza, have found their way into films, cartoons and even computer games. Supposedly intended as a parody of the most popular escapist fiction of the day, the 'books of chivalry', this precursor of the modern novel broadened and deepened into a sophisticated, comic account of the contradictions of human nature. Cervantes' greatest work can be enjoyed on many levels, all suffused with a subtle irony that reaches out to encompass the reader."
Posted by Marianne at 16:24