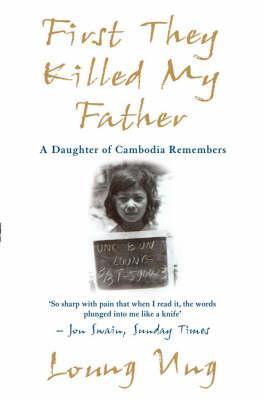 Ung, Loung "First they killed my father. A Daughter of Cambodia Remembers" - 2000

The book was recommended to one of our members by a friend. We appreciated the information about the Khmer Rouge. It was so long ago. Reading this, we remember history better than with dry articles. As the memoir was written through the eyes of a five year old, it was sometimes a little naïve and black & white, her father was her hero though being part of the former government, he also must have made mistakes.

The story was not just depressing, we knew she survived. We did learn that there is no simple solution, that democracy is also dangerous. This book shows how terribly cruel people can be, how you can make some believe in something that allows them to treat other people in the most inhuman way. Sometimes it's good to read about the event a long time after the event has taken place. Also, Sihanouk, Pol Pot, Khmer Rouge, Cambodia, these words all mean more to us now. This should be on the reading list of secondary schools.

I am really glad we read this book, especially after none of us was very happy with the North Korean book we had read ("Somewhere Inside: One Sister's Captivity in North Korea and the Other's Fight to Bring Her Home" by Laura and Lisa Ling).

I liked the way Loung Ung told the story from her perspective as a child and how she changed during that time. How much she had to go through, the death of her beloved sister, then her father, her mother and baby sister. How can anyone that little endure all those terrible and cruel deaths, she knew what they might have done to any of them, especially her father. I felt especially sorry for her when she had to be in the training camp and pretend she was someone else.

All I learned from this book, something I already knew: War is terrible, whether civil or otherwise. And anyone who contributes to that thought by their writing, is doing a great job. Those who are the most vulnerable suffer the most.

I would love to read her second book: "Lucky Child: A Daughter of Cambodia Reunites with the Sister She Left Behind".

We discussed this in our book club in April 2013.

"Until the age of five, Loung Ung lived in Phnom Penh, one of seven children of a high-ranking government official. She was a precocious child who loved the open city markets, fried crickets, chicken fights and being cheeky to her parents.

When Pol Pot's Khmer Rouge army stormed into Phnom Penh in April 1975, Loung's family fled their home and were eventually forced to disperse to survive. Loung was trained as a child soldier while her brothers and sisters were sent to labour camps. The surviving siblings were only finally reunited after the Vietnamese penetrated Cambodia and started to destroy the Khmer Rouge.

Bolstered by the bravery of one brother, the vision of the others and the gentle kindness of her sister, Loung forged on to create for herself a courageous new life.

'First They Killed My Father' is an unforgettable book told through the voice of the young and fearless Loung. It is a shocking and tragic tale of a girl who was determined to survive despite the odds."
Posted by Marianne at 12:43