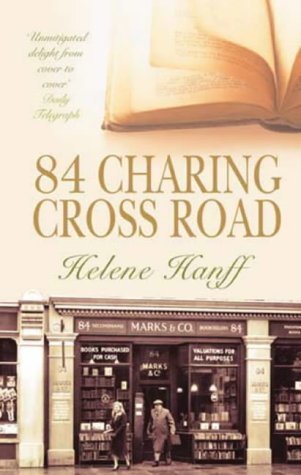 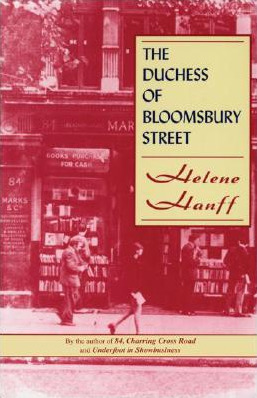 Even though "84 Charing Cross Road" and "The Duchess of Bloomsbury Street" are officially two different books, I bought them in one cover, read them back to back and will deal with them here as if they were one.

The first part, "84 Charing Cross Road", consists completely of letters, the second part, "The Duchess of Bloomsbury Street", is written in diary form.

What a lovely book. A writer who loves reading and orders used books from a bookstore across the sea at a time where it wasn't that easy to order anything "online". Helene Hanff orders books from this small bookshop, "Marks & Co." in London, and starts a lovely correspondence not just with one of the salespeople but with almost the whole shop.

I loved everything about this book. Not only was it more or less entirely on the subject of reading, it recommended a lot of interesting literature, it was also beautifully written. It is both funny as well as loving and caring. The author doesn't just exchange letters, she also sends food and other necessities to her new friends in post-war London who still have to live very restricted.

I knew I had found the right book when I stumbled upon her first P.S. on page 3: "I hope 'madam' doesn't mean over there what it does here." It was just such a reminder about the good old saying "The English and the Americans are two peoples divided by a common language." This is an experience certainly everyone agrees with who has dealt with people from the two nations at the same time.

I could relate to her "education through books", especially when she started telling about how she owed her literature studies to Sir Arthur Quiller-Couch’s lectures on English literature. She describes on page 142: "Q was lecturing to young men educated at Eton and Harrow. He therefore assumed that his students--including me--had read Paradise Lost as a matter of course and would understand his analysis of the 'Invocation to Light' in Book 9. So I said, 'Wait here,' and went down to the library and got Paradise Lost and took it home and started reading it and got to page 3, when I hit a snag:
Milton assumed I'd read the Christian version of Isaiah and the New Testament and had learned all about Lucifer and the War in Heaven, and since I'd been reared in Judaism I hadn't. So I said, 'Wait here,' and borrowed a Christian Bible..." Isn't that the best way to learn something? I have always enjoyed "reading" an encyclopedia, jumping from one entry to the next, I can just see her doing that with the books.

A great example of her art of observation is also shown on page 172: "The Hilton has several dining rooms, he took me into the largest. It was crowded with sleek, well-groomed men and beautifully dressed women; nobody looked dowdy the way they do at the Kenilworth. And the strawberries were huge and the cream was thick and the rolls were hot and the butter was cold and the chicken livers were done to perfection.
But at the Kenilworth, nobody sends the eggs back. Nobody talks to the waiters with the casual rudeness that says, 'I am better than you are because I am richer.' And the waiters don't answer with that studied blend of contempt and servility, and none are obsequious - my God, Alvaro couldn't even pronounce it. And nobody at a Kenilworth breakfast table looks bitter or discontented, no men at the Kenilworth moodily drink their lunch, no women with hard-painted faces keep a sharp eye on their handbags.
You look at the faces in the Hilton dining room and first you want to smack them and then you just feel sorry for them, not a soul in the room looked happy."
This is funny and deep at the same time. If you enjoy this part, you will certainly enjoy the rest of the book. It is far too short with its 240 pages.

"Your ad in the Saturday Review of Literature says that you specialize in out-of-print books. The phrase 'antiquarian bookseller' scares me somewhat as I equate ‘antique’ with expensive. I am a poor writer with an antiquarian taste in books and all the things I want are impossible to get over here except in very expensive rare editions, or in Barnes & Noble's grimy, marked -up schoolboy copies.

So begins the delightfully reticent love affair between Miss Helene Hanff of New York and Messrs Marks and Co, sellers of rare and secondhand books, at 84 Charing Cross Road, London. For twenty years this outspoken New York writer and Frank Doel, a rather more restrained London bookseller, carry on an increasingly touching correspondence to the point where, in early December, 1949, Helene is suddenly worried that the six-pound ham she's sent off to augment British rations will arrive in a kosher office.

Soon they are sharing more personal news about Frank's family and Hanff's career. No doubt their letters would have continued, but in 1969 the firm's secretary informed Helene that Frank Doel had died. In the collection's penultimate entry, Helene Hanff urges a tourist friend, 'If you happen to pass by 84 Charing Cross Road, kiss it for me. I owe it so much.'"