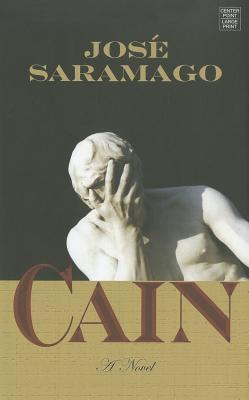 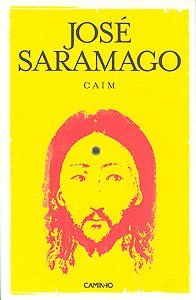 I love reading the novels of our Nobel Prize winners so couldn't resist starting this one, "Cain" by José Saramago. I read that this is the last book of this atheist about the bible. Hmm, sounded interesting.

And it was. The story starts with Adam and Eve and how they are thrown out of paradise ... well, we all know that story. Or do we? José Saramago finds a unique and satirical way of telling this story that is as old as mankind. We then see the first murder, Cain killing his brother Abel and then we see how Cain goes on living and meets all the biblical celebrities like Abraham, Moses, Noah, Lilith, Job, and cruises all the important locations, for example, he is in Lot, Babel, Jericho, Sodom and Gomorrah, at the most important times, in short, he is omnipresent.

What struck me most, the characters were very realistic, very real. The background was explained well and a lot of stories made sense. We learn here what happened to Adam and Eve after they left paradise and where they went.

Whether you believe in the bible or not, this is a highly interesting book, a very good starting point for deep discussions. It also helps understand a lot of the stories, even though it is just one point of view. But, it is the part usually not taught in religious education classes. I don't want to say anything is true in this book, it is not, it is an interpretation by an atheist. It still contributes to a better understanding. It is even funny at times.

The author has been criticized a lot for this novel and "The Gospel According to Jesus Christ", especially by the Catholic church. I think I need to quote another Nobel Prize winner here, Sir Winston Churchill who said "You have enemies? Good. That means you've stood up for something, sometime in your life."

I am very glad to have read this.

José Saramago "who with parables sustained by imagination, compassion and irony continually enables us once again to apprehend an elusory reality" received the Nobel Prize for Literature in 1998.

"After killing his brother Abel, Cain must wander forever. He witnesses Noah's ark, the destruction of the Tower of Babel, Moses and the golden calf. He is there in time to save Abraham from sacrificing Isaac when God's angel arrives late after a wing malfunction.

Written in the last years of Saramago's life, Cain wittily tackles many of the moral and logical non sequiturs created by a wilful, authoritarian God, forming part of Saramago's long argument with God and recalling his provocative novel 'The Gospel According to Jesus Christ'."

I contribute to this page: Read the Nobels and you can find all my blogs about Nobel Prize winning authors and their books here.
Posted by Marianne at 18:46