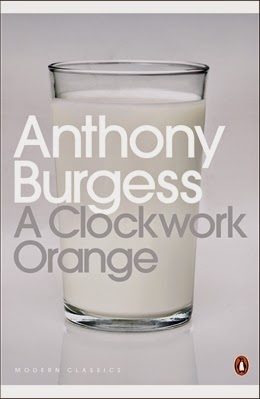 So, the beginning of the book was not very pleasurable at all. I found it very hard to follow Alex's thoughts. But, even when I did finally find the link online, I found it hard to follow his thoughts. This is not your usual dystopian literature where you see the world from the view of the oppressed, rather you see it from the oppressor's side, and that is not a nice view, either. Maybe it is because the protagonist is only fifteen, you don't want a teenager to have such negative thoughts, to live such a violent life. Maybe it is also because life changes even for Alex and his friends.

In any case, even though there were parts of the book I enjoyed, I don't think this is a novel I would pick up again soon.

From the back cover: "Anthony Burgess's nightmare vision of a society overrun by nihilistic violence and governed by a menacing totalitarian state, 'A Clockwork Orange' includes an introduction by Blake Morrison in Penguin Modern Classics. Fifteen-year-old Alex doesn't just like ultra-violence - he also enjoys rape, drugs and Beethoven's ninth. He and his gang of droogs rampage through a dystopian future, hunting for terrible thrills. But when Alex finds himself at the mercy of the state and subject to the ministrations of Dr Brodsky, and the mind-altering treatment of the Ludovico Technique, he discovers that fun is no longer the order of the day.
The basis for Stanley Kubrick's notorious 1971 film, 'A Clockwork Orange' is both a virtuoso performance from an electrifying prose stylist and a serious exploration of the morality of free will."
Posted by Marianne at 17:11