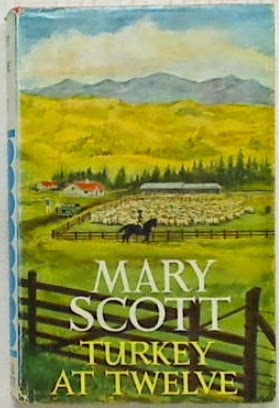 Another enjoyable reread of Mary Scott's stories about Susan and Larry, the farmer wives from New Zealand. This is book number five from the series of eight.

This time, Susan and Larry have to worry about the same things we still worry about today, all the work a public holiday brings. How many people will feed on a turkey? How much dessert do we need? How many drinks? And where, oh where will the whole family sleep?

Not only that, they also have to listen to an unmarried relative who knows so much better how to lead a household or raise kids than our two friends. How times have not change at all. Will these kind of people ever die out? I doubt it.

Anyway, as always, this story is both funny and nice. A feel good read.

Unfortunately, they are out of print and only available second hand. I have heard in the meantime, that you can buy some of them as ebooks, i.a. "A Change from Mutton"

From the back cover: "Turkey At Twelve. The back blocks of New Zealand are once again the background for this latest novel by Mary Scott."
Posted by Marianne at 11:45