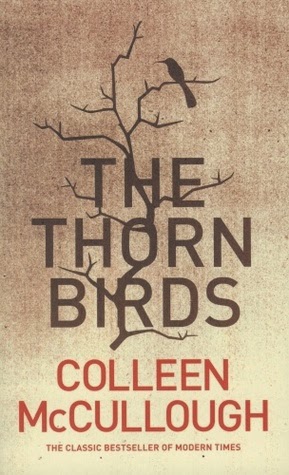 I read this book years ago, shortly after the mini series came out in 1983. However, I am sure that I read it in German at the time because I wasn't able to get English books that easily back then. Or at all.

I wanted to reread the novel for ages and now I finally achieved that.

I think we can easily call this book an epic saga. The story of the Cleary family over two generations coming from New Zealand to Australia in the early Twenties of the last century and also moves to London and Rome. But the main story is told in New Zealand, how a family settles in a strange country and goes through all the hardships you can imagine.

The story touches almost every topic you can imagine, well, there are over 700 pages, so there is space for a lot of drama. It is so well written. The characters come alive in a way that makes you feel you know them personally. You fear with them, you rejoice with them. You feel sorry for them when something bad happens. And there is plenty of bad stuff to happen to a family like that but there are also some quite unexpected parts, roads this story takes that you don't think it would.

I especially loved it because it shows the hardships people went through when settling in a new continent. Even though the Clearys were not the first settlers, there was still a lot to overcome, both in New Zealand as well as in Australia. Some things we should not forget nowadays where all these countries have all the modern facilities imaginable.

Anyway, if you love chunky books and would like to read about Australia, this is a wonderful book, whether you have seen the series or not. Read it. You won't regret it. Maybe it's time to get the DVD out again, as well.

From the back cover: "Treasured by readers around the world, this is the sweeping saga of three generations of the Cleary family. Stoic matriarch Fee, her devoted husband, Paddy, and their headstrong daughter, Meggie, experience joy, sadness and magnificent triumph in the cruel Australian outback. With life’s unpredictability, it is love that is their unifying thread, but it is a love shadowed by the anguish of forbidden passions. For Meggie loves Father Ralph de Bricassart, a man who wields enormous power within the Catholic church…
As powerful, moving, and unforgettable as when it originally appeared, THE THORN BIRDS remains a novel to be read…and read again."
Posted by Marianne at 15:32