Taylor, Andrew "The Ashes of London" 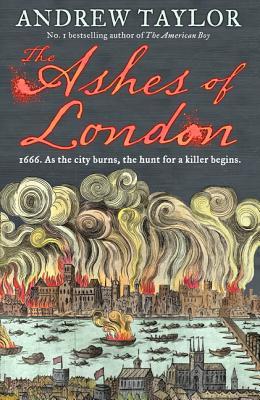 This is a highly exciting book. I am seldom tempted to check out what happens at the end of the book but I really was this time. Didn't do it, of course, because that would spoil the surprise.

This is a combination of historical novel and crime story, I can see them turning it into a very successful movie one day. Although, they probably are going to change something. As they always do.

We have all read something about the Great Fire of London, well, if we read historical novels we have read one or two about it, if not, we have heard that it happened, that it was in 1666 and that it started in a bakery in Pudding Lane. But how did the people live at the time?

A while ago I read Daniel Defoe's "A Journal of the Plague Year" and that happened just ten years before the fire. Whilst the plague killed many people and brought the city to ruin, the fire brought work and helped to bring it back to its former glory.

If historical novels are your thing, this is a MUST.

From the back cover:
"A CITY IN FLAMES London, 1666. As the Great Fire consumes everything in its path, the body of a man is found in the ruins of St Paul's Cathedral - stabbed in the neck, thumbs tied behind his back. A WOMAN ON THE RUN The son of a traitor, James Marwood is forced to hunt the killer through the city's devastated streets. There he encounters a determined young woman who will stop at nothing to secure her freedom.
A KILLER SEEKING REVENGE When a second murder victim is discovered in the Fleet Ditch, Marwood is drawn into the political and religious intrigue of Westminster - and across the path of a killer with nothing to lose..."
Posted by Marianne at 12:29