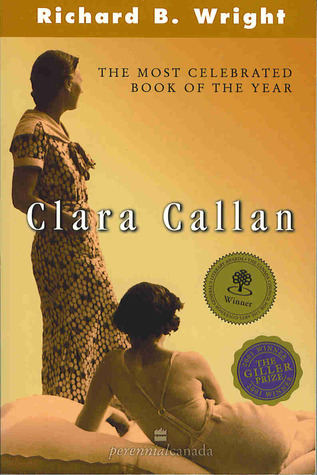 I received this book from a Canadian member of our book club. As everyone knows, my TBR pile is enormous, that's the only reason it took me so long to start this. My friend has passed away shortly afterwards, that is probably the main reason why I didn't tackle it. I am sorry I could never tell her how much I enjoyed the book. Thank you, Mary.

This is the stories of two sisters in the 1930s. One who goes to New York to become a famous radio celebrity and the other one who stays at home to be a teacher. While they have their different opinions about religion, they mostly agree about other subject, especially political matters.

While the story switches between Clara's diary and letter written between her and - mainly - her sister, it meticulously follows the chronological order. I don't mind if a book switches between the times but it is nice to read one that starts at a certain point and then carries on as time goes by.

This is not just a story about two sisters, it's about women in general at the time between the two wars, about the perception people had, about what was "done" and what wasn't? You can't but like both Clara and her sister Nora, they are both amiable people in their own way trying to find their own niche in a world that would rather see women the same as they always were, wives and mothers, housekeepers.

As an avid reader myself, I am always happy to find characters in novels that enjoy reading as much as I do. Clara Callan was such a person. She even read a lot of books that I enjoyed myself. Another reason to like her.

I thoroughly enjoyed reading this novel. And I'm not surprised that the author received three prestigious Canadian book awards for this novel: The Giller Prize, the Trillium Book Award, and the Governor General's Award.

"It's the late 1930s and two sisters, Clara and Nora Callan, face the future with both hope and uncertainty. Clara, a 30ish schoolteacher who lives in small-town Ontario, longs for love and adventure. Nora, her flighty and very pretty younger sister, escapes to the excitement of New York, where she lands a starring role in a radio soap and becomes a minor celebrity. In a world of Depression and at a time when war clouds are gathering, the sisters struggle within the web of social expectations for young women.

Clara and Nora, sisters so different yet so inextricably linked, face the future in their own ways, discovering the joys of love, the price of infidelity, and the capacity for sorrow lurking beneath the surface of everyday experience. A brilliantly realized, deeply moving novel, Clara Callan is a masterpiece of fiction."
Posted by Marianne at 11:10