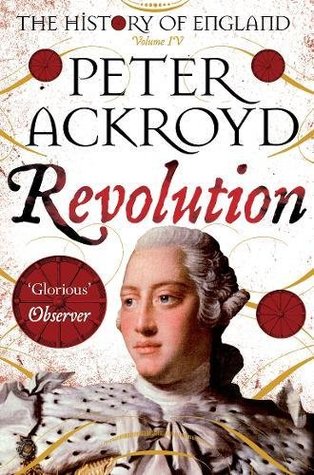 After having read the first three books in the series "The History of England" by Peter Ackroyd (Foundation, Tudors, Civil War), I couldn't wait to read the fourth one.

Was it as interesting as the first ones? It surely was though I would have loved more information about the kings of that period. However, I learned a lot about the industrial revolution and the people at the time. For example, the reason the British were quicker to industrialize their country because they didn't have all the little states like Germany, France, and Austria had at the time. Should maybe make them think about whether it's such a good idea to leave the European Union.

It certainly was just as exciting a time as the Tudors which are my favourite times in English history so far.

Same as in the previous books, I missed a list at the back about who became king when and who was the son of whom etc. But I guess that's not going to happen in this series.

"The fourth volume of Peter Ackroyd's enthralling History of England begins in 1688 with a revolution and ends in 1815 with a famous victory.

In it, Ackroyd takes readers from William of Orange's accession following the Glorious Revolution to the Regency, when the flamboyant Prince of Wales ruled in the stead of his mad father, George III, and England was - again - at war with France, a war that would end with the defeat of Napoleon at Waterloo.

Late Stuart and Georgian England marked the creation of the great pillars of the English state. The Bank of England was founded, as was the stock exchange, the Church of England was fully established as the guardian of the spiritual life of the nation and parliament became the sovereign body of the nation with responsibilities and duties far beyond those of the monarch. It was a revolutionary era in English letters, too, a time in which newspapers first flourished and the English novel was born. It was an era in which coffee houses and playhouses boomed, gin flowed freely and in which shops, as we know them today, began to proliferate in our towns and villages. But it was also a time of extraordinary and unprecedented technological innovation, which saw England utterly and irrevocably transformed from a country of blue skies and farmland to one of soot and steel and coal."

I will certainly read the next edition of "The History of England", Vol.5 Dominion and other books by this great author.
Posted by Marianne at 17:17