Westerman, Frank "The Republic of Grain" 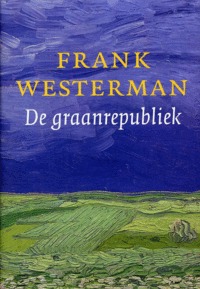 "The Republic of Grain" describes life in a Dutch region, in the North of the Netherlands during a tough time. The rise and fall of an area due to nature, politics, decisions made. Mainly, this is the story of a guy who lived during the biggest part of the 20th century who was the son of a big farmer, got into politics and ended up the agricultural commissioner at the EU in Brussels. But it is also the story of his country, his village, his home

Frank Westerman is a renowned journalist who has spent a lot of time in Eastern Europe as a correspondent for a Dutch newspaper. I am sure I will read more of his books.

"From time immemorial, the Dutch have owed their survival to pushing back the sea. Now, at the end of the twentieth century, the dikes will be pierced and water let in once again. In the grain republic of Groningen where the clay is richest and the best grain harvested, the centuries-old polders will be flooded. The farming community, and with it a thousand-year-old tradition, will have to yield to environmental pressures and recreation.

Central in this amazing turnabout is the European agricultural technocrat Sicco Mansholt who worked his way up from farmer’s son in Groningen to Minister of Agriculture and subsequently Agricultural Commissioner of the EEC and Chairman of the European Commission. His controversial ‘Mansholt Plan’, formulated in the sixties to reform agriculture and manage it in a more industrial way, fundamentally changed European agriculture. By means of stable grain prices and import levies Mansholt was able to push grain production up sharply. But the initial success turned against him. From the seventies, ever larger surpluses of grain, milk, butter, and meat were created which then had to be dumped on the world market. Ultimately, Mansholt’s agriculture policy absorbed more than half of the eec budget and was permanently abandoned in the eighties.

Because of the enormous increase in scale, many farmers in Europe had already given up. Meanwhile Mansholt had also undergone a sea-change in his thinking. Under the influence of the Report of Rome and his remarkable relationship with the German Green politician Petra Kelly, he changed his mind about the idea of food self-sufficiency and became a champion of the idea of preferring the environment to agriculture.
De graanrepubliek ends with this apotheosis. The plan to flood fertile agricultural land will definitely mean the end of gentlemen farmers and farm workers. In a compelling way Frank Westerman shows how the history of the grain republic of Groningen is in fact the story of the destruction of all European farmers and of an old world that has disappeared."
Posted by Marianne at 17:18