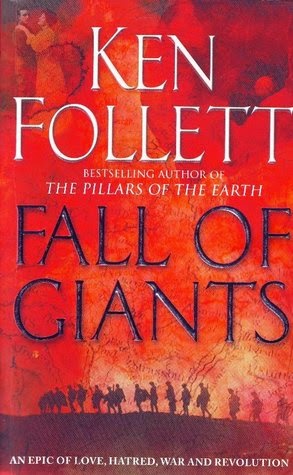 What a book. And it's only the beginning of a trilogy. From the coal mines of Wales to the communists in Russia, from the English to the German aristocracy, from the American president to the Russian Tsar, we can see from the poor and thee rich in all these countries, how World War I happened. We can see that nothing is as black and white as the historians would like us to believe. We grow to love the characters just as much as if we would know them in real life. The interweaving of fictional with real life people makes us even believe they really exist. All these stories could have happened, they probably did happen to several people in any of these countries.

We meet a Welsh miners family, two Russian orphans, an English Earl and his family, a German diplomat, an American politician and many many more. Through their eyes we can see their fear of a looming war, what they can do or can't do to prevent it and how they have to arrange their lives to get through it.

"Fall of Giants". I would say it compares very well to "The Pillars of the Earth" and "World without End" which also belong to my favourite novels and that's why I got this one. This is just as brilliant. It is just a very different time. Europe in the twentieth century. This one takes place during WWI, the next one will be WWII and then the third the Cold War.  This way of showing history reminds me a little of Edward Rutherfurd, another favourite author of mine, who always describes the history of a country, region or city through the ages by using several fictitious families and also some real historical figures. This one is very similar. The families in the book come from Wales, England, Germany, Russia and the USA and they all have very different backgrounds, you have the feeling you are there when the war starts but you have been living through all the anxiety with the characters.

Ken Follett's style of writing is beautiful, his research into a subject astonishingly perfect. I have read a lot of books on this subject and still learned  many new details.

The only bad point of the book is that you can hardly put it down and really want to start the net one the minute you turned the last page. I was lucky to have waiting long enough until all three parts of the series are out so I don't have to wait too long until the next one.

In any case, we can all learn a lot from this book. If we didn't know it before, I'm sure everyone agrees after reading this. War is evil. Everyone loses in a war.  Let's not start another one.

The next two books, "Winter of the World" and "Edge of Eternity", will treat WWII and the Cold War respectively. Can't wait to read them.

"Five families are brought together through the world-shaking dramas of the First World War, the Russian Revolution and the struggle for votes for women.

It is 1911, and the coronation day of King George V.  Thirteen-year-old Billy Williams begins his first day at work in a coal mine.

The Williams family is connected by romance and enmity to the Fitzherberts, aristocratic coal-mine owners. Lady Maud Fitzherbert falls in love with Walter von Ulrich, a spy at the German Embassy in London. Their destiny is entangled with that of Gus Dewar, ambitious young aide to U.S. President Woodrow Wilson. Two orphaned Russian brothers soon become involved, but Grigori and Lev Peshkov’s plan to emigrate to America fall foul of war, conscription and revolution.

FALL OF GIANTS combines richly developed historical details with fast-moving action and powerful emotion to deliver this absorbing narrative."
Posted by Marianne at 16:23