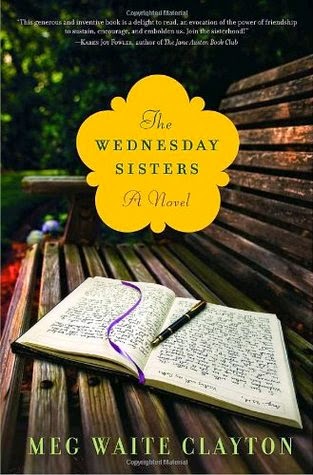 I don't think I would have read this book if it wasn't for a friend and her Facebook book club. Somehow the title seemed more like chick lit even though the cover photo is quite tempting, a book on a bench with a pencil ... and it does show what the book is about. Women on a bench in a park, talking and writing about literature. But there is so much more in this novel. The story starts in the 60s when the right place for a woman would be at home, taking care of husband and children.

A good book about friendship. And reading. And friendship about books. Any book club can be like these women, Frankie, Linda, Kath, Brett, and Ally who meet by chance in a park while their kids play in the playground. While they get to know each other better, they start not just discussing the books they love and read but also to write their own stories. And while the friends grow with their reading and writing, women on the whole grow, after all, it is the sixties. We can compare the role women played back then to today. Certainly a subject not many of today's generation understand because they didn't experience it this way. Telling a student from today how hard it was for women to even get into higher eduction just half a century ago is more difficult than telling them about the war. Even though they have experienced neither, it is easier for them to understand the fighting with weapons than the fighting for equal opportunities.

I still think this could be classified as chick lit because it certainly is an easy read and despite some problems in the story, it is still easy going. So, one of those "easy reads" you could attempt if you don't want a long and depressing story.

Meg Waite Clayton mentions herself that "Not every book is for every reader." However, I think, this book could be for many different kind of readers. It has a story for everyone. Not my favourite but I'm glad I read it.