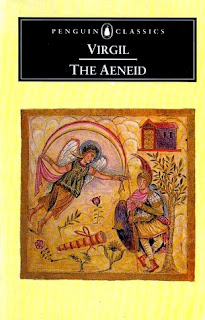 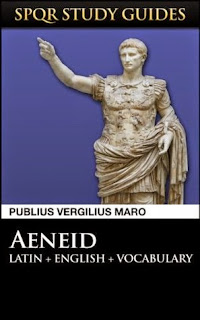 I am not a big fan of poetry and this is the biggest example of a poem, one of the very earliest. I found it hard to follow because I prefer to read a flowing story, prose.

However, I can see why so many of the stories from this have been turned into big screen movies, very successful movies. The stories of the start of the Roman nation, the start of our lives today. Many of us have learned the history of Troy in school and a lot of the other stories that are captured in this poem.

As I said, tough read but I am truly happy I made my way through it and it will stay with me forever, same as "Odyssey", another epic story.

From the back cover: "The Aeneid of Virgil (70-19 B.C.) describes the legendary origin of the Roman nation. It tells of the Trojan prince Aeneas, who escaped with some followers after Troy fell, and sailed to Italy. Here they settled and laid the foundations of Roman power.
The Aeneid is a poet's picture of the world, where human affairs are controlled by human and superhuman influences. It is a literary epic inspired by Virgil's love of his native Italy and his sense of Rome's destiny as a civilized ruler of nations.
This translation by W.F. Jackson Knight aims to preserve the range, vitality, and music of the original."
Posted by Marianne at 13:18