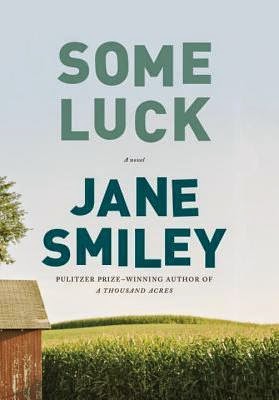 I have liked Jane Smiley from the first time I read one of her books ("The All-true Travels and Adventures of Lidie Newton") and I still love her several books later. Of course, she deservedly received the Pulitzer Prize for "A Thousand Acres".

This is the beginning of a trilogy, a family saga that spans over a hundred years. It starts in 1920 on a farm in Iowa, shortly after the end of World War I. The Langdon family is a family like every other one, working their land and trying to survive during depression and war. We get to love some of them and dislike some of the others. Jane Smiley manages to describe them as if they were our own family, as if we read the stories of our ancestors and just want to know what happens with the next generation.

The author has chosen an interesting way of describing this family, describing each year in a chapter, so we can follow the life and death of our characters.

I have grown up in a village, our house was surrounded by farms, so I could relate to a lot of the subjects in the story, even though that is not my generation. Yet.

We have to leave the family in 1953 as this is the end of the book, the end of an era. But I am looking forward to reading more about the Langdons in the next book, "Early Warning" and the final one "Golden Age".

I will put more of her books on my wishlist in the meantime.

"From the winner of the Pulitzer Prize: a powerful, engrossing new novel - the life and times of a remarkable family over three transformative decades in America.  On their farm in Denby, Iowa, Rosanna and Walter Langdon abide by time-honored values that they pass on to their five wildly different children: from Frank, the handsome, willful first born, and Joe, whose love of animals and the land sustains him, to Claire, who earns a special place in her father’s heart.

Each chapter in Some Luck covers a single year, beginning in 1920, as American soldiers like Walter return home from World War I, and going up through the early 1950s, with the country on the cusp of enormous social and economic change. As the Langdons branch out from Iowa to both coasts of America, the personal and the historical merge seamlessly: one moment electricity is just beginning to power the farm, and the next a son is volunteering to fight the Nazis; later still, a girl you’d seen growing up now has a little girl of her own, and you discover that your laughter and your admiration for all these lives are mixing with tears.

Some Luck delivers on everything we look for in a work of fiction. Taking us through cycles of births and deaths, passions and betrayals, among characters we come to know inside and out, it is a tour de force that stands wholly on its own. But it is also the first part of a dazzling epic trilogy - a literary adventure that will span a century in America: an astonishing feat of storytelling by a beloved writer at the height of her powers."
Posted by Marianne at 14:18