Scott, Mary "Yours to oblige" 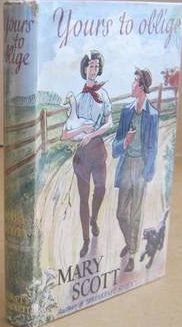 Mary Scott managed to write many charming little stories that tell the tale of a hard but humorous and loving life in New Zealand in the 1950s. Like this one of Justin, a lawyer's son who has just finished his studies and whose girlfriend asks him to give up his cosy life for three months and work hard in a little village where it's hard to find workers because of the hard life they have to lead.

It wouldn't be a Mary Scott novel if Justin didn't manage to find a job and find a lot of friends in the middle of nowhere. We meet many new characters, most of them lovely and delightful.

This novel is just as nice to read as all of her others books. Find a list of all her books here.

From the back cover: "Engagement - postponed on probation
There are difficulties between Justin and Elaine, a young, almost engaged couple. Because Elaine wants to know whether Justin can live without his father's money, whether he is able to stand on his own feet. They want to separate for three months, as a test.
Justin hitchhikes into the country where only the real guy counts, someone who can work hard. In Totara, a pioneer settlement on the New Zealand coast, he passes his practical test: In a bushfire, he shows willingness and courage, and now he is recognized by the villagers as one of them, as a real guy.
When Justin gets to know the young farmer's daughter Sally, he believes he has found the woman of his life. But first there is still his old friend Elaine, and secondly, everything turns out quite differently."

Unfortunately, Mary Scott's books are out of print and only available second hand. I have heard in the meantime, that you can buy some of them as eBooks, like this one here.
Posted by Marianne at 16:26