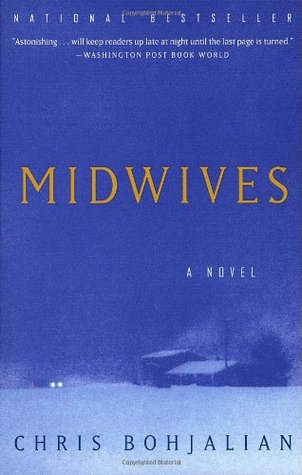 This book has been on my TBR pile for quite a while and I am glad I finally read it. A well-written novel about a midwife in trouble, her daughter who lives through it all and an old question, is it better to be born at home or in hospital. I was born at home and quite a few things went wrong so that my mother had my younger siblings in the hospital. So did I.

I don't want to judge anyone who opts for a home birth, I think it is a great idea when mother and baby are healthy. I was happy that I could leave the hospital on the same day after the birth of my second son in England as opposed to staying in for a whole week in Germany where my oldest was born.

I think this book is a good idea to instigate discussions about home birth versus hospital birth but in the end, I think everyone should decide for themselves. I would not want to judge over anyone like the jury in this book has to do over the midwife after one of her homebirths goes wrong.

The author has a great talent to portray both the feelings of the midwife as well as her 14 year old daughter. It's amazing for a man to be able to write like that. If I hadn't seen his picture in the front of the book, I would have sworn that Chris must be short for Christine. Certainly an author worth watching.

Like all the other books I read from Oprah's book club list, I have enjoyed this a lot.

From the back cover:
"On an icy winter night in an isolated house in rural Vermont, a seasoned midwife named Sibyl Danforth takes desperate measures to save a baby's life. She performs an emergency caesarean section on a mother she believes has died of a stroke. But what if Sibyl's patient wasn't dead - and Sibyl inadvertently killed her?
As Sibyl faces the antagonism of the law, the hostility of traditional doctors, and the accusations of her own conscience, Midwives engages, moves, and transfixes us as only the very best novels ever do."
Posted by Marianne at 16:17