Ephron, Nora "The Most of Nora Ephron" 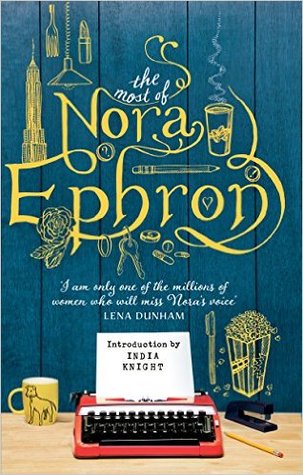 There is so much in Nora Ephron's writings that every woman can relate to. She is funny, she is hilarious, she is truthful. She says what she thinks, she says what a lot of women think and I love her for that. Maybe that is one of the reasons why "When Harry Met Sally" belongs to my favourite movies, it tells a story with real people in there.

I would love to quote from every single chapter in this great collection of her writings, some of which I had already read in "I Feel Bad About My Neck and Other Thoughts on Being a Woman" and "I Remember Nothing. And Other Reflections" but that doesn't matter, reading them together and in this sequence makes a lot of sense and makes us understand the wonderful woman that was Nora Ephron even better.

Also, we travel in time with her, to her first years in journalism, to a time that changed a lot for women, and still not enough. I loved the insight into journalism as well as her point of view. I think every woman should read this, especially those that come after us. Such wisdom, such insight into the real world. Brilliant.

Nora, you left us far too early. RIP.

Some of my favourite quotes:

"Reading is everything. Reading makes me feel like I've accomplished something, learnt something, become a better person."

This is my favourite part in "When Harry Met Sally". No, not "I'll have what she's having" (although that's not bad, either) but the way Sally orders her apple pie.
Waitress: "Hi, what can I get you?"
Harry: "I'll have the Number Three."
Sally: "I'd like the chef salad, please, with the oil and vinegar on the side. And the apple pie à la mode."
Waitress: "Chef and apple à la mode."
Sally: "But I'd like the pie heated, and I don't want the ice cream on top, I want it on the side. And I'd like strawberry instead of vanilla if you have it. If not, then no ice cream, just whipped cream, but only if it's real. If it's out of a can, then nothing."
Waitress: "Not even the pie?"
Sally: "No, just the pie, but then not heated."
Waitress: "Ah."

And this sounds yummy:
Lee Lum's recipe for lemon chicken involved dipping strips of chicken-breast in water-chestnut flour, frying it, plunging it into a sauce that included crushed pineapple, and dousing the entire concoction with a one-ounce bottle of lemon extract.