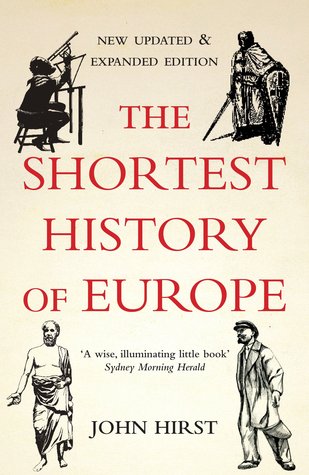 An interesting book about the origins of European history. First there were the Greeks, then the Christians and then the Germans. If you say it like this, it all sounds a little simple but this is a collection of great lectures by a very dedicated professor of history. The Australian John Hirst gives a great oversight over anything you always wanted to know about European history and how we became what we are now.

With just under 200 pages and talks starting in the classic times and ending in the present, with lots of maps, tables, drawings and pictures, this is probably the best book if you want to know about this topic.

In any case, this book is worth picking up. The subtitle "Read in an afternoon. Remember for a lifetime." is certainly more than correct.

From the back cover:
"READ IN AN AFTERNOON. REMEMBER FOR A LIFETIME.
In this short, entertaining and thought-provoking book, acclaimed historian John Hirst provides a fascinating exploration of the qualities that have made Europe a world-changing civilisation.
Starting with a rapid historical overview from the ancient Greeks to the present day (the 'shortest history' itself), Hirst goes on to explore in detail what makes Europe unique: its political evolution; the shaping influence of its linguistic boundaries; the crucial role played by power struggles between Pope and Emperor; and of course the great invasions and conquests that have  transformed the continent.
Written with clarity, feeling and wit, The Shortest History of Europe is a tour-de-force: read in a single afternoon, it will be remembered for a lifetime."
Posted by Marianne at 12:19