Crwys-Williams, Jennifer (ed.) "In the Words of Nelson Mandela" 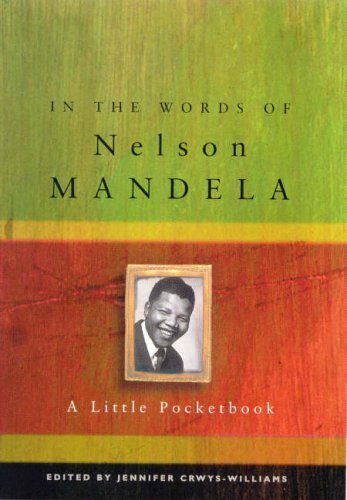 Crwys-Williams, Jennifer (ed.) "In the Words of Nelson Mandela: A Little Pocketbook" - 1998

A lovely little collection of quotes by Nelson Mandela who has received the Nobel Peace Prize and whose "Long Walk to Freedom" has given us so much inspiration. Here is a short version of what hes has said about all sorts of different subjects, about hope and freedom, racism and love, Africa and the world, shortly, about everything.

One of my favourite quotes:
"When we read we are able to travel to many places, meet many people and understand the world."

And another one which is especially interesting.
"There are men and women chosen to bring happiness into the hearts of others - those are the real heroes."
Nelson Mandela is definitely one of them.

"Through his words and deeds Nelson Mandela has been embraced by the whole world as a symbol of courage, hope and reconciliation. Collected in In the words of Nelson Mandela, his comments on subjects as diverse as humanity, racism, friendship, oppression and freedom provide an insight into the man and all he stands for. By turns moving, generous, humorous and sad, this title eloquently conveys his warmth and dignity. It will be both an inspiration and a source of strength for all who read it."

Nelson Mandela received the Nobel Prize for Peace in 1993 "for ... work for the peaceful termination of the apartheid regime, and for laying the foundations for a new democratic South Africa".
Posted by Marianne at 16:01