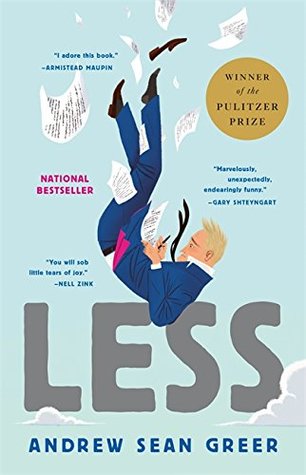 So far, I have never read a Pulitzer Prize winning novel that wasn't interesting. I guess I had to come across one at one point. This was it.

If the author had expanded more on the fear of the protagonist of turning old, or even on the fear of being left alone since his boyfriend got married, this could have been a good story. Or if he had concentrated on the different events he visits in the different countries, it could have been a good "holiday story" or "summer read". But this way, it was nothing at all. The story jumps from the present into the past and while I usually like that, I still would like to know where I am at the moment.

According to the notes on the back cover, this book is supposed to be funny, hilarious. I didn't laugh even once.

The only difference between this book and chick lit? They don't talk about shoes all the time.

"Arthur Less is a failed novelist about to turn fifty. A wedding invitation arrives in the post: it is from an ex-boyfriend of nine years who is engaged to someone else. Arthur can't say yes - it would be too awkward; he can't say no - it would look like defeat. So, he begins to accept the invitations on his desk to half-baked literary events around the world.

From France to India, Germany to Japan, Arthur almost falls in love, almost falls to his death, and puts miles between him and the plight he refuses to face. Less is a novel about mishaps, misunderstandings and the depths of the human heart."

Andrew Sean Greer received the Pulitzer Prize for "Less" in 2018.
Posted by Marianne at 18:46