Remarque, Erich Maria "All Quiet on the Western Front" 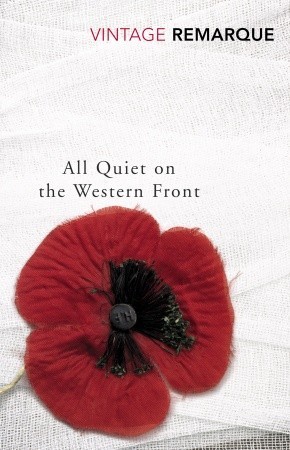 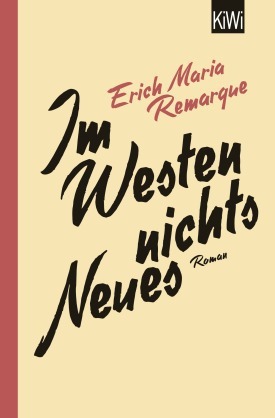 The original German title of this novel is "Nothing New in the West" which is sort of the same as the English title but you can interpret it in two ways, not just something being quiet but something just as normal, in this case, people have been dying just as any other day of the war.

Anyway, I wanted to read this book for ages, it's been on my wishlist for decades. I have no idea why it took me so long. I remember knowing about it when I was in school and having seen part of the film (I think they might have shown it to us in school) and that it certainly contributed to me becoming a life-long pacifist. That and my parents who had to survive World War II as children and teenagers.

But it's not just the part that tells us about the war, the trenches, the fights, the cold, the dampness, the rats, the bad food, seeing the friends fall one after the other, worrying you might be next ... The protagonist has a home leave in between and his rendition of the visit with his family and him being in turmoil because it is a different life and he is a different person, it tells us a lot about what those soldiers went through when they survived, what soldiers still go through today. They are never the same again.

The edition I read (see the right picture) had a lot of additional information about how the book was received, how the Nazis forbade the film (of course!) and how they generally tried to bring this book into miscredit.

I recently read "War and Turpentine" by Stefan Hertmans who told us just about the same kind of story about his Belgian grandfather. The young men or rather boys on both sides went through a lot of hardship while the politicians were sitting in their warm homes and pushed further and further. As usual. So, that really is no news.

I think this should be a must-read, if not for all students in school but definitely for all politicians who think a war is a good way to solve their problems.

"Considered by many the greatest war novel of all time, All Quiet on the Western Front is Erich Maria Remarque’s masterpiece of the German experience during World War I.

I am young, I am twenty years old; yet I know nothing of life but despair, death, fear, and fatuous superficiality cast over an abyss of sorrow. . . .

This is the testament of Paul Bäumer, who enlists with his classmates in the German army during World War I. They become soldiers with youthful enthusiasm. But the world of duty, culture, and progress they had been taught breaks in pieces under the first bombardment in the trenches.

Through years of vivid horror, Paul holds fast to a single vow: to fight against the principle of hate that meaninglessly pits young men of the same generation but different uniforms against one another . . .  if only he can come out of the war alive.

'The world has a great writer in Erich Maria Remarque. He is a craftsman of unquestionably first rank, a man who can bend language to his will. Whether he writes of men or of inanimate nature, his touch is sensitive, firm, and sure.' The New York Times Book Review"
Posted by Marianne at 13:21