Mistry, Rohinton "Such a Long Journey" 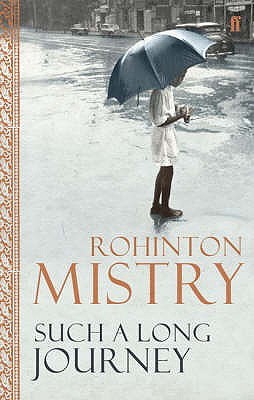 This is my third book by Rohinton Mistry after "A Fine Balance" and "Family Matters".

Let me tell you right away, it didn't captivate me as much as the others did. I wouldn't say it was too gloomy, too political (although I loved that) or there wasn't enough material about India. I also wouldn't say it wasn't just as well written as the others. Maybe it was just the characters. I don't think I liked a single one of them. Except for the painter in the street who paints pictures of all the different Gods of all the different religions. That was nice.

I liked to see how even innocent people can be caught up in a political upheaval. But all in all, I disliked that there were too many stories, too many characters, none of them didn't really have a huge role, not even the main characters.

The author probably wanted to portray the hopelessness these people live in. He managed that but it wasn't something that touched me as much as it should have. Tough to describe but there we are.

I guess the book was too slow for me. However, this was his first book, so I know he is getting better with time.  It didn't put me off reading more novels by this author. And I did learn something about the politics of the time. That was worth reading it.

"Gustad Noble is a hard-working bank clerk and a devoted family man who gradually sees his modest life unravelling. His young daughter falls ill; his promising son defies his father's ambitions for him. One day he receives a letter from an old friend, asking him to help in what at first seems like a heroic mission. But he soon finds himself unwittingly drawn into a dangerous network of fraud and betrayal.

Compassionate, moving and rich in details of character and place, this unforgettable novel charts the journey of a moral heart in a turbulent world of change."
Posted by Marianne at 13:49