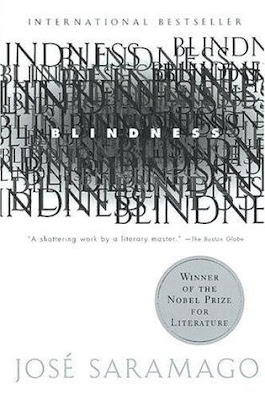 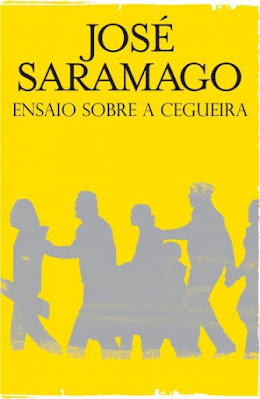 This is my second book by this wonderful author. Same as "Cain", this book is totally captivating.

We get no information about the city or even the country where this takes place. However, this is a dystopian novel and they usually could take place anywhere. We never know what will happen if a catastrophe - or in this case an epidemic - strikes us.

In this book, the people go completely mad. Everyone goes blind one after the other and everyone is scared. That doesn't mean they all react in the same way. There are those who stick together and help others and other who live according to the motto "help yourself so God will help you". It wouldn't even be fair to the animals to say they behave like them because animals at least only take what they need.

Both the sentences and the paragraphs in this book are very long, there is hardly a place where you can stop. But that makes it even more compelling, you have the feeling you are stuck in the book just the way the blind people are stuck in their destiny. A good way to emphasize the situation.

None of the characters have a name. They are just called "the first blind man" or "the doctor's wife" and "the girl with the dark glasses". Again, this makes it easier for us to identify with them, I guess. Anyone could be one of the guys or one of the girls.

He definitely makes it easy for us to imagine that this actually could happen. We can try to imagine how it is when you turn blind. And we can feel with the people who not only go blind but lose their life as they knew it until then.

Great novel. Like many dystopian books, a look into humanity or the lack of it.

"A city is struck by an epidemic of 'white blindness'. The first man to succumb sits in his car, waiting for the light to change. He is taken to an eye doctor, who does not know what to make of the phenomenon - and soon goes blind himself.

The blindness spreads, sparing no one. Authorities confine the blind to a vacant mental hospital secured by armed guards under instructions to shoot anyone trying to escape. Inside, the criminal element among the blind holds the rest captive: food rations are stolen, women are raped. The compound is set ablaze, and the blind escape into what is now a deserted city, strewn with litter and unburied corpses.

The only eyewitness to this nightmare is the doctor's wife, who faked blindness in order to join her husband in the camp. She guides seven strangers through the barren streets. The bonds within this oddly anonymous group - the doctor, the first blind man and his wife, the old man with the black eye patch, the girl with dark glasses, the boy with no mother, and the dog of tears - are as uncanny as the surrounding chaos is harrowing. Told with compassion, humor, and lyricism, Blindness is a stunning exploration of loss and disorientation in the modern world, of man's will to survive against all odds."

We discussed this book in our international online book club in April 2019.

José Saramago "who with parables sustained by imagination, compassion and irony continually enables us once again to apprehend an elusory reality" received the Nobel Prize for Literature in 1998.

I contribute to this page: Read the Nobels and you can find all my blogs about Nobel Prize winning authors and their books here.
Posted by Marianne at 14:47