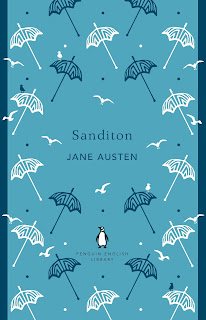 I've had this fragment of a novel on my TBR pile for a while already. I never was sure whether I really wanted to read it. I have read "The Watsons" and "Lady Susan" and Andrew Davies have just made this into a mini-series. He has already made other great series and movies from Jane Austen's novels and several other classics, so I'm almost certain it's a good one.

But I wanted to read it first. It is a very promising beginning of another Austen novel, the characters well depicted, the scenes worked out beautifully, you can tell that there are going to be a few problems along the way that need solving. It is lovely to read how she made fun of certain traits in people and I'm sure there was more like that to come. What a shame she wasn't well enough to tell her sister what her plans were for the story.

Do I really want to hear the end from someone else? Oh, Jane, why couldn't you live longer? It would have been great to have a hundred of your stories.

"Written in the last months of Austen's life, Sanditon features a glorious cast of hypochondriacs and speculators in a newly established seaside resort, and shows the author contemplating a changing society with scepticism and amusement. It tells the story of Charlotte Heywood, who is transported by a chance accident from her rural hometown to Sanditon, where she is exposed to the intrigues and dalliances of a small town determined to reinvent itself - and encounters the intriguingly handsome Sidney Parker."