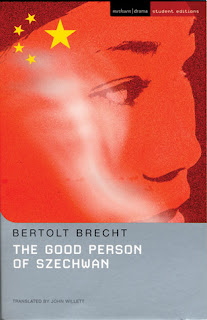 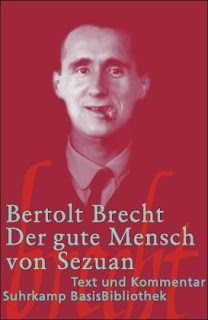 A story about good and bad people. And how we can or cannot distinguish one from the other. In this play, even the Gods have difficulties in doing that.

No wonder, the author was in trouble finding even one good person in the times that he lived in. But would that really be so much easier nowadays? We hear about riots in countries that are supposed to be peaceful and democratic, we have refugees coming from everywhere, children go hungry or die of all sorts of illnesses contracted through the problems imposed on their countries and families through others.

Bertolt Brecht has been one of my favourite German authors ever since I went to school and had to read his pieces. (See also here: Life of Galileo). If you haven't heard from him, he also wrote the "Three Penny Opera" which I should review one day.

"The Good Person of Szechwan is one of Bertolt Brecht's most popular works. When three gods come to earth in search of a thoroughly good person, they encounter Shen Teh, a goodhearted but penniless prostitute, who offers them shelter. Rewarded with enough money to open a tobacco shop, 'Angel of the Slums' Shen Teh soon becomes so overwhelmed by the demands of people seeking assistance that she invents a male alter ego, 'Tobacco King' Shui Ta, to deal ruthlessly with the business of living in an evil world. The Good Person of Szechwan is a masterpiece that shines a light on human nature and social mores.

Brecht's parable of good and evil was first performed in 1943 and remains one of his most popular and frequently produced plays worldwide.

In 1952, Hannah Arendt hailed Bertolt Brecht as 'beyond a doubt the greatest living German poet and possibly the greatest living European playwright.' His plays, widely taught and studied, are searing critiques of civilizations run amok. During the thirties, the subversive nature of his work sent Brecht from Germany to Scandinavia and later to the United States. The Good Person of Szechwan, written during Brecht's exile and set in Communist China, is a parable of a young woman torn between obligation and reality, between love and practicality, and between her own needs and those of her friends and neighbours."