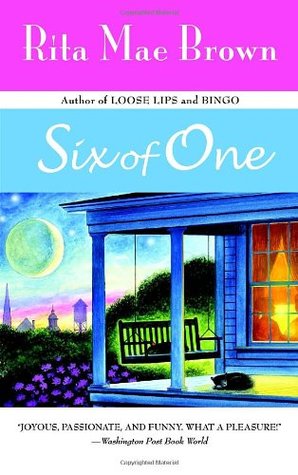 "Six of One" - 1978
A story about two elderly ladies, the Hunsenmeir sisters, and the Lesbian daughter of one of them. They live in Runnymede, Maryland, a small town with all its nosiness and gossip. A totally hilarious story, great for a good laugh. Time to re-read, I think.

From the back cover:
"Perched right on the Mason-Dixon line, tiny Runnymede, Maryland, is ripe with a history almost as colorful as the women who live there - from Celeste Chalfonte, headstrong and aristocratic, who murders for principle and steals her brother’s wife, to Fannie Jump Creighton, who runs a speakeasy right in her own home when hard times come knocking. Then of course, there’re Louise and Julia, the boldly eccentric Hunsenmeir sisters. Wheezie and Juts spend their whole lives in Runnymede, cheerfully quibbling about everything from men to child-rearing to how to drive a car. But they never let small-town life keep them from chasing their biggest dreams - or from being true to who they really are. Sparkling with a perfect combination of sisterhood and sass, Six of One is a richly textured Southern canvas - Rita Mae Brown 'at her winning, fondest best'." 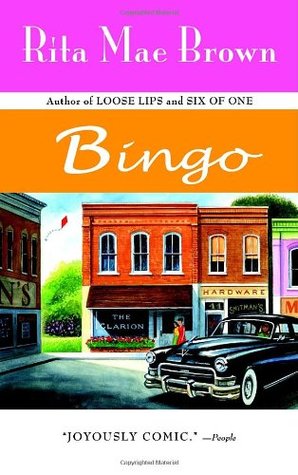 "Bingo" - 1988
From the back cover:
"In the sequel to her beloved Six of One, Rita Mae Brown returns with another witty tale of passion and rivalry in the small Southern town of Runnymede, Maryland. Newspaper editor Nickel Smith is scrambling to save the local paper from corporate extinction, even as she is engaged in an affair that would shock the town as much as it amazes Nickel herself. Meanwhile, her mother, Julia, and her aunt Louise, the infamous Hunsenmeir sisters, who've set the town on its ears for decades, keep an eagle eye on Nickel. No matter that she's a grown woman and that they're going on ninety; they need someone to gossip about! Not even the town's weekly bingo games can keep Louise and Julia out of trouble when Ed Tutweiler Walters, an eligible newcomer, arrives in town--and has the sisters fighting over him like schoolgirls. A telling look at the foibles of modern relationships, Bingo is full of wisdom about the comforts, trials, and absurdities of small-town life and especially of our own nearest and dearest." 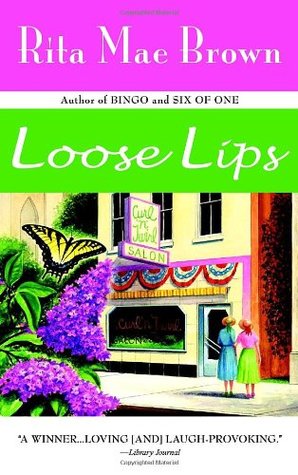 From the back cover:
"If you crossed Mitford, North Carolina, with Peyton Place, you might come up with Runnymede, Maryland, the most beguiling of Southern towns. In Loose Lips, Rita Mae Brown revisits Runnymede and the beloved characters introduced in Six of One and Bingo, serving up an exuberant portrayal of small-town sins and Southern mores, set against a backdrop of homefront life during World War II.

"I'm afraid life is passing me by," Louise told her sister.

In the picturesque town of Runnymede, everyone knows everyone else's business, and the madcap antics of the battling Hunsenmeir sisters, Julia (Juts) and Louise, have kept the whole town agog ever since they were children. Now, in the fateful year of 1941, with America headed for war, the sisters are inching toward forty...and Juts is unwise enough to mention that unspeakable reality to her sister.

The result is a huge brawl that litters Cadwalder's soda fountain with four hundred dollars' worth of broken glass. To pay the debt, the sisters choose a surprisingly new direction. Suddenly they are joint owners of The Curl 'n' Twirl beauty salon, where discriminating ladies meet to be primped, permed, and pampered while dishing the town's latest dirt.

As Juts and Louise become Runnymede's most unlikely new career women, each faces her share of obstacles. Restless Juts can't shake her longing for a baby, while holier-than-thou Louise is fit to be tied over her teenage daughter's headlong rush toward scandal. As usual, the sisters rarely see eye to eye, and there are plenty of opinions to go around. Even the common bond of patriotic duty brings wildly unexpected results when the twosome joins the Civil Air Patrol, watching the night sky for German Stukas. But loose lips can sink even the closest relationships, and Juts and Louise are about to discover that some things are best left unsaid.

Spanning a decade in the lives of Louise, Juts, and their nearest and dearest, including the incomparable Celeste Chalfonte, Loose Lips is an unforgettable tale of love and loss and the way life can always throw you a curveball. By turns poignant and hilarious, it is deepened by Rita Mae Brown's unerring insight into the human heart."

By the way, when I read the books, the titles were not half as colourful.
Posted by Marianne at 15:59