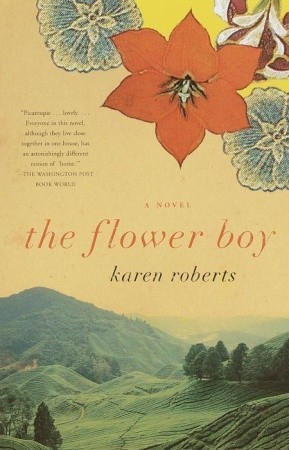 "The Flower Boy is a deeply moving and enchanting novel - a story of love, town secrets and family divisions."

I read this book probably ten years ago. A story about Ceylon, as it was called then, in the 1930s. A story about a friendship, about Europeans in Asia, about masters and servants. A very well told story of the friendship between a little Ceylonese boy and the daughter of his English masters. I really liked this novel.

From the back cover:
"An accomplished debut, The Flower Boy is the tragically romantic story of people from two cultures, one ruling the other, and the human passions that defy and nearly overcome social taboos.

In the colonial society of 1930s Ceylon, the separation between servant and master is clearly drawn. Young Chandi, however, knows that the baby born to his mother’s mistress will be his friend. And, indeed, their friendship blossoms in the lush gardens of the tea plantation on which they live. Many, English and Ceylonese, are troubled by the friendship, but the English planter is charmed by the children’s bond, and ultimately by Chandi’s mother, Premawathi. But the world encroaches on their Eden. Beautifully observed, compellingly plotted, The Flower Boy is a compassionate novel of a lost world and those who struggled to hold on to it."
Posted by Marianne at 19:09