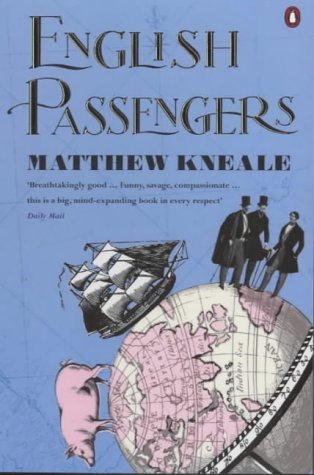 "A big, ambitious novel with a rich historical sweep and a host of narrative voices. Its subject is a vicar's ludicrous expedition in 1857 to the Garden of Eden in Tasmania, [as] meanwhile, in Tasmania itself, the British settlers are alternately trying to civilise and eliminate the Aboriginal population ... The sort of novel that few contemporary writers have either the imagination or the stamina to sustain."

How the sailors from the Isle of Man who just wanted to smuggle a little alcohol, ends up in Tasmania, I don't remember that very well. I do remember though, how they landed there and the effect they had on the people living there already, the native Australians.

Quite a weird book at times. I liked the part of the aboriginals and what you could learn about their lives. I do like historical novels, so it was interesting to learn more about that. But I didn't like the priest and all the Europeans and the story that led to their "discovery". The novel did get quite boring at times.

It's been quite a while that I read it (with my previous book club). It had just received the Whitbread Award and it didn't encourage me to read any more books from their lists even though I had liked the runner up which I had read before ("White Teeth" by Zadie Smith).

Book Description:
"It is 1857 and the Reverend Geoffrey Wilson has set out for Tasmania, hoping to find the true site of the Garden of Eden. But the journey is turning out to be less than straightforward – dissent is growing between him and sinister racial-theorist Dr Potter, and, unknown to both, the ship they have hurriedly chartered is in fact a Manx smuggling vessel, fleeing British customs. In Tasmania the aboriginal people have been fighting a desperate battle against British invaders, and, as the passengers will discover, the island is now far from being an earthly paradise ..."

Matthew Kneale was shortlisted for the Booker Prize for "English Passengers" in 2000.
Posted by Marianne at 17:36