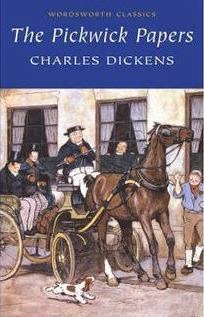 The first novel of one of the greatest authors in history. As many novels at the time, it appeared in instalments in the newspaper. This makes the novel so easy to read, even though it has about 1,000 pages. Every chapter had to be finished in a day and you don't end up with some that go over several days.

Dickens has probably become so widely known and loved because he had a certain way to keep his readers in suspension but also because his language was easy to understand which does not necessarily mean it was simply written, not at all.

As in his other novels, he can make a big story out of any little occurrence, there is a lot of humour in his writing which is critical at the same time.

You can hardly believe that the author was only 24 when he wrote this work. Samuel Pickwick, Esquire, has three good friends, Messrs. Nathaniel Winkle, Augustus Snodgrass and Tracy Tupman with whom he starts "The Pickwick Club", a group that wants to explore the country by travelling through it and then report back to the other members. On their different voyages, they experience several bigger and smaller adventures but they always make us laugh. At the same time, Dickens draws a great picture of the different classes and life in the middle of the 19th century in the United Kingdom. He shows again why he is one of the greatest authors that have ever lived.

My favourite is still "Great Expectations" and I also read "A Tale of Two Cities" and "A Christmas Carol". You can find all my Dickens related posts here.

From the back cover: "The Pickwick Papers is Dickens' first novel and widely regarded as one of the major classics of comic writing in English. Originally serialised in monthly instalments, it quickly became a huge popular success with sales reaching 40,000 by the final part. In the century and a half since its first appearance, the characters of Mr Pickwick, Sam Weller and the whole of the Pickwickian crew have entered the consciousness of all who love English literature in general, and the works of Dickens in particular."
Posted by Marianne at 16:07