Lamb, Wally "We are Water" 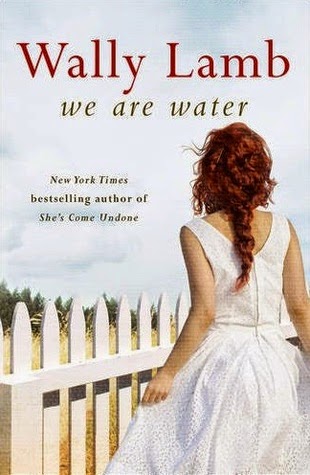 I have only read four books by Wally Lamb so far but I can honestly say that he belongs to one of my favourite authors. He is not just a good writer, a writer who can only be admired for his talent, he manages to put so many different subjects into his stories, every single one could be a whole series. A friend mentioned that she has the feeling that he is talking to you rather than her reading his story. I think that is an excellently accurate description of the author and his writing. I also love how he goes back and forth between characters and time, thereby building up the suspension until you can hardly bare it anymore. Still, he does not confuse you with his writing, he makes it easy to follow the story. And it feels real, you feel included. That's why I love Wally Lamb. And he is one of the successful authors I've read from the beginning of his career.

This is a highly interesting story of a family full of secrets. Old secrets and new secrets. Secrets outside of the family and secrets inside. This is a very intense novel that brings up all kinds of emotions and fears. It is written from many aspects, most of the main characters have a possibility to describe their view of the story. We can see both sides of alcoholism, for example, of child abuse (not that anyone wants to defend the "other" side but it's interesting to see how these stories develop), of almost any negative side of our society, racism, prisons, drugs, anything you can imagine, it's in there. A family, mother, father, three children, all mostly successful in their jobs, looks nice from the outside. But Wally Lamb shows us the inside. Intriguing.

Now I only have one question: Mr. Lamb, when are you going to write your next book?

From the back cover: "Anna Oh, mother of three and successful artist, is picking out her wedding dress for the second time in her life. In the pretty, rustic town of Three Rivers Connecticut, where she raised her kids, Anna is preparing to marry Viveca, who is the opposite of her ex-husband in almost every way. But the wedding provokes very mixed reactions, opening a Pandora’s Box of toxic secrets – dark and painful truths which will change the family dynamic forever.
We are Water is a brilliant portrait of modern America, written by a beloved and bestselling author who tackles life's complex issues with his trademark humour, wisdom and compassion."

While looking up this book, I have learned that there is another fiction novel by Wally Lamb that I have not read (Wishin' and Hopin': A Christmas Story) as well as two non-fiction books about women prisoners that I have not yet read. Will have to put them on my wishlist.

My reviews to his other books are here.
Posted by Marianne at 16:15