Scott, Mary "Board, but no Breakfast" 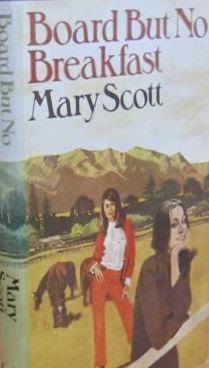 The farmer's wives Susan and Larry in New Zealand have seen many ups and downs in their life and thanks to Mary Scott, the world has been able to watch them. This time, times are tough again, farmers don't earn a lot so their wives think about a way to earn a little extra to contribute to the costs of a family.
They both happen to have little cottages on their land, places where helpers used to live. Now, what could be easier than to rent them out to people who want to take "holidays in the countryside". Well, it's not that easy but that's the fun part for the reader. Just as hilarious as the author's other Susan and Larry books.

This is the eighth book in the series by Mary Scott. And this is the list of all of them:

Unfortunately, they are out of print and only available second hand. I have heard in the meantime, that you can buy some of them as ebooks. And don't worry, Mary Scott has written more than just the Susan and Larry series, there will be more reviews in the future.

From the back cover (translated): "When two farmers' wives want to earn a little extra money in their own way ...
The life of the New Zealand farmers is not easy, especially at a time when money is tight and they no longer know where something can still be saved. The two friends Larry and Susan decide to earn something extra in order to make their husbands' lives easier. But how to realize the good intention? After long long time of contemplating, the two have an idea: they will rent out the vacant houses on their farms as holiday homes. And there are quite a few answers to their ad »Holidays in the countryside". Larry and Susan have no idea that they will have the funniest, craziest, most tumultuous weeks of their lives ..."
Posted by Marianne at 17:07