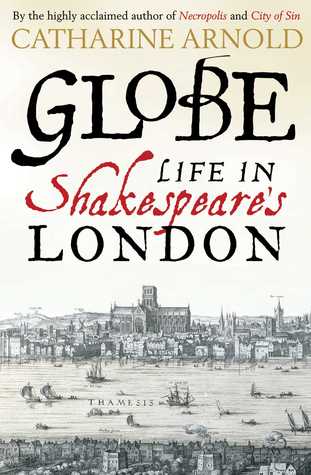 I have read a few books of and about William Shakespeare and so far have enjoyed most of them a lot even though I always say a play is written to be played, not to be read.

My favourite of those books is still "Shakespeare: The World as a Stage" by Bill Bryson, one of my favourite authors.

However, this is a great non-fiction book about The Globe, how it first was built in Shakespeare's time and what it meant for the world of acting back then and how it influenced our world of the theatre today.
I love reading about historical times but the Tudor times belong to my favourites. There was just so much going on, the world was about to change. The world of great rulers was always the world of great art. And no matter what people say about Elizabeth I, she did a great job in a man's world and with her encouragement, the theatre flourished.

Unfortunately, I have not yet been able to visit the new Globe but I am determined that I will during my next visit to London.

From the back cover:
"The life of William Shakespeare, Britain's greatest dramatist, was inextricably linked with the history of London. Together, the great writer and the great city came of age and confronted triumph and tragedy. Globe takes its readers on a tour of London through Shakespeare's life and work as, in fascinating detail, Catharine Arnold tells how acting found it's place in the city. We learn about James Burbage, founder of the original Theatre in Shoreditch, who carried timbers across the Thames to build the Globe among the bear-gardens and brothels of Bankside in 1599, and of the terrible night in 1613 when the theatre caught fire during a performance of King Henry VIII. Rebuilt, the Globe continued to stand as a monument to Shakespeare's genius until 1642 when it was destroyed on the orders of Oliver Cromwell. And finally we learn how, 300 years later, Shakespeare's Globe opened once more upon the Bankside, to great acclaim, rising like a phoenix from the flames.

Arnold creates a vivid portrait of Shakespeare and his London from the bard's own plays and contemporary sources, combining a novelist's eye for detail with a historian's grasp of his unique contribution to the development of the English theatre. This is a portrait of Shakespeare, London, the man and the myth."
Posted by Marianne at 13:14