Atkinson, Kate "Behind the Scenes at the Museum 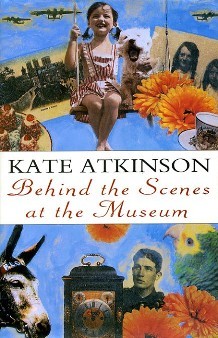 I have heard about this book at least a decade and it's been on my TBR pile for almost as long. I have no idea why it took me so long to read it. I'm glad I finally did, it's a brilliant story.

Ruby tells her story, her mother's story, her grandmother's story and the story of all the women in her family. It's really interesting and even though she jumps back and forth in their lives, there is still quite a surprise at the end.

An interesting read. Kate Atkinson has a great way of expressing herself but an even greater one of laying down a story, unfolding it page by page. Such a fascinating family story where everyone can recognize themselves but also distance yourself far enough that it doesn't affect you too much. She has a great sense of humour that brings the families through hard times. And hard times there are plenty.

However, there are four generations with a lot of characters, two world wars, a lot of different relationships, the story is not written in chronological order. It is advisable to take notes so you remember who is who.

It was a great book to read. I wish someone would write a book like that about my family.

From the back cover:
"Ruby Lennox was conceived grudgingly by Bunty and born while her father, George, was in the Dog and Hare in Doncaster telling a woman in an emerald dress and a D-cup that he wasn't married. Bunty had never wanted to marry George, but here she was, stuck in a flat above the pet shop in an ancient street beneath York Minster, with sensible and sardonic Patrica aged five, greedy cross-patch Gillian who refused to be ignored, and Ruby...

Ruby tells the story of The Family, from the day at the end of the nineteenth century when a travelling French photographer catches frail beautiful Alice and her children, like flowers in amber, to the startling, witty, and memorable events of Ruby's own life."