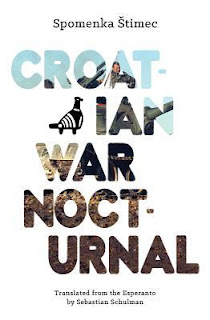 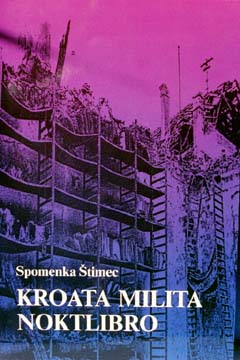 This is not just the diary of a girl who speaks Esperanto about her life during the Balkan wars, her life and that of her family and friends, and often about their deaths, as well. It is a view into life during wartime. Snippets of several lives that are affected that build a big picture together.

I bought this book because it was written in Esperanto but there are several translations available, i.a. in English. The title is a word play. Day-book is the Esperanto word for diary (same as in many other languages) but because she wrote this mainly during the night, she calls it her night-book. She had to type it in the bathroom because it was the only room in the house without a window where she could use light at night - whenever they had some.

I doubt that this book is available in a normal bookshop but if you can find it, it is totally worth reading. * It is a story about how from one minute to another, love can turn to hate, how you can more or less be "given" an enemy. Neighbours and friends turn against each other all of a sudden because you don't belong to the same group as they do. What a nightmare! And you know what? I see this happening all the time and I'm afraid if someone is given the chance, they will do what the politicians in former Yugoslavia have done and start a civil war or an even greater one. We all need to stick together because in the end, we are all the same. None of us is better or worse than someone else because of where we come from.

I therefore hope, that everyone will follow the words of one of the widows in the story whose speech at her husband's funeral is on the back cover:
"Friends, relatives, neighbours, colleagues - now is the time to end the hate. It does not matter who started first and how often. I do not feel anger against anyone because my husband was killed. But stop! For the mortal remains of my husband, I beg you - forgive and forget all open bills! Let us go forward. Do not let our children and grandchildren fight against each other again. Whether this happens depends on us. Let us do what is in our power. Let us be the beginning of peace, of which everyone is talking."

* The book has been published in English in the meantime, see my link to Goodreads. (as always also through the picture)
Posted by Marianne at 16:10